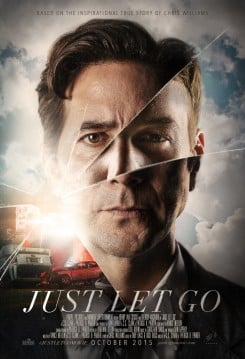 This Monday, September 28, the inspiring new film “Just Let Go” will show for one night only on 450 screens nationwide—a sneak peek before it opens for a limited release in Mormon areas on October 9.

The film stars Henry Ian Cusick (Lost; The 100; Scandal; 24) as Chris Williams, a Salt Lake City man who was driving his family out for dessert in 2007 when their car was struck head-on by a drunk driver.

Chris’s pregnant wife and two of their children, then ages 9 and 11, were killed.

The movie chronicles the true story of Chris’s amazing path toward forgiving the driver. Monday’s screening will also feature some unique bonuses:

The one-night event aims to create a national discussion about the nature and necessity of forgiveness within individuals, communities, and even nations. In addition to the full-length feature, audiences will experience commentary, discussion, and a performance by renowned worship pastor and Christian recording artist Lincoln Brewster.

The filmmakers are hoping for a great turnout on Monday, possibly of Mormons around the country who are taking the whole crew out for a special Family Home Evening. (That Monday-at-the-movies strategy worked great last year for Meet the Mormons.)

Yesterday I had the opportunity to sit down with Chris in the Deseret Book offices and ask him about his journey. (Will you allow me a testimony moment? I felt the Spirit in the room. I hope you’ll see the movie.) — JKR 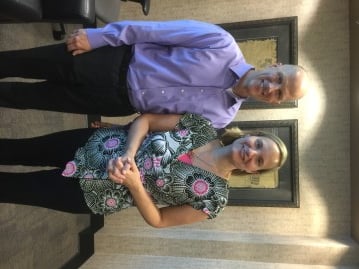 RNS: Can you describe the night of the accident?

Chris Williams: My wife, who was seven months pregnant, and three of my four children were going out for an evening treat. We were starting to descend under an overpass, and our vision was a bit obscured. So when we did finally see a car coming at us, it was too late to do anything. We were t-boned on the passenger side of the car.

I was desperately trying to feel for a pulse on my wife, and not getting one, and I could see a gash on her arm that wasn’t bleeding. I had worked as an orderly in my earlier life, and I knew that when you see a significant wound like that that isn’t bleeding, it’s bad. My son and daughter were also killed. The immediate onset of grief was almost frightening . . . to feel so sad and so overwhelmed by what had just happened. My thoughts were interrupted by a sound, a terrible wailing, and I didn’t realize that it was me making that sound.

For whatever reason I felt that I needed to look at the car that had just hit us. The overturned car was about fifty to eighty feet away. I heard a voice over my left shoulder, just as if someone was standing right behind me, a command to “let it go.” In three words I was being queried if I had faith in Christ to be healed. Scripturally, before the Savior could enact any miracle, he often asked if there was faith sufficient for that miracle.

So for me that moment was my commitment to say that I would be able to let it go. But I also knew, based on that soul-compressing grief, that I could not do it on my own. So out of my weakness came that decision to turn my life over to Christ so he could do the healing.

RNS: So you were able to forgive the driver who caused the accident?

Williams: The emergency technician who was there with me said I looked at him and exclaimed, “We need to forgive him!” I don’t recall saying that. But the ET, who didn’t have much faith, said it made him reevaluate his own view of God.

When I got to the ER and started to receive treatment, that’s when a friend told me that it was a seventeen-year-old that had struck us. But a sense of love and mercy just grew in my mind and my soul. Which was fascinating, because the pain I had from the broken bones also started to increase. I had fluid in my lungs, and felt like I was starting to drown.

But my spirit was free to really see that moment for what it was, which was a call from my Savior to join him in reaching out to this young man who had done this to my family.

I earnestly wanted him to be OK and to not have sustained any injury in the crash. I then asked a friend to have his name put on the temple prayer roll, to have a community pray for this young man, joining with my own prayers and desire for this young man to discover who he really is. To wake up and realize his eternal potential and become a new man in Christ.

RNS: Did you meet with the young man?

Williams: About a year after, when they were doing some Empathy Therapy with him in the detention facility. He had prepared some questions to ask me about the changes in my life. I was happy to do it, but I prayed beforehand that I wouldn’t say anything in that meeting that would be a setback in his progress.

At the end, he finally looked me in the eye, and he just said, “After everything I did to your family, how can you forgive me?” I found myself saying that if he had seen anything in me of love and forgiveness, it was the Savior working through me.

In the film, this scene depicts a handshake, but in the actual moment, it was a hug. Which was wonderful, because when we first came into the room together, he didn’t know whether I was going to slug him or what.

RNS: What has happened to him?

Williams: He was released six months early, and has been speaking in high schools and junior highs about the dangers of underage drinking. He finished his education. In 2012, it was my privilege to attend his wedding reception. To stand with his family while he cut the cake, and to see the happiness in him. Our Savior has been watching out for him.

RNS: How did your two surviving children deal with the grief?

Williams: They didn’t have that “let it go” moment like I had. For them it was more of a standard trial of working through the pain and anguish and grief.

But they did follow my example from day one. The accident was on a Friday night. On Sunday morning my fourteen-year-old son came with me to church where I was serving as the bishop. And I bore my testimony and said that if anyone’s faith had been shaken by the events of the weekend, they should lean on my faith–including my son Michael.

Michael, even in his grief, was spared the anger or desire for retribution. My sons never even thought about including Cameron [the driver] in their grief. For them it was just a journey of trying to go forward without their mother and their siblings.

And later a change came when I remarried a widow who had two children. And then we had two more children together, and that was a light for all of us in healing from the crash.

RNS: You wrote a book about your experiences, and now there is this film. How are you hoping that it helps people to forgive?

Williams: The crash happened right before Valentine’s Day 2007. Before the cameras I invited the community to extend an act of mercy or forgiveness by Valentine’s Day and write an email to me and my boys to share what they had done.

And because the story became so public I had people seeking me out with their stories and their anger and inability to move forward from something that had happened in their lives. So I thought it might be helpful for me to write about it, and I took some of my journal entries and began collating them. A friend encouraged me to do it right and put them together in a book, and Deseret was good enough to publish that under its Shadow Mountain label.

There are those who read and can feel the impact based on the words, but the words alone didn’t quite allow for that vulnerability that a movie would. The film itself I think is phenomenal. It’s almost uncanny how well they’ve been able to depict the experience.

I hope the movie will allow people to come in and have that “let it go” moment themselves. If anything has been holding them back, like anger or fear, they can let it go. And if they don’t feel that, then at least they will have a positive role model or example of what forgiveness can look like.

RELATED POSTS ON MORMONS AND FILM:

“Despicable Me” creator on Mormonism, Minions, and “the best calling in the church”

Mixed reviews for “Meet the Mormons”

Faith
Senator Mike Lee’s just one example. Mormon men still like Donald Trump.
News
Taco trucks and voter guides boost political profiles of faith communities at the margins
Christianity
For Mormons in a faith crisis, the Gospel Topics essays try to answer the hard questions
Flunking Sainthood
Retired BYU professor denounces Donald Trump in viral video
Flunking Sainthood
Suicide, complicated grief and the hidden darkness of the heart
© Copyright 2020, Religion News Service. All rights reserved. Use of and/or registration on any portion of this site constitutes acceptance of our User Agreement and Privacy Policy, Privacy Statement and Cookie Notice. The material on this site may not be reproduced, distributed, transmitted, cached or otherwise used, except with the prior written permission of Religion News Service.