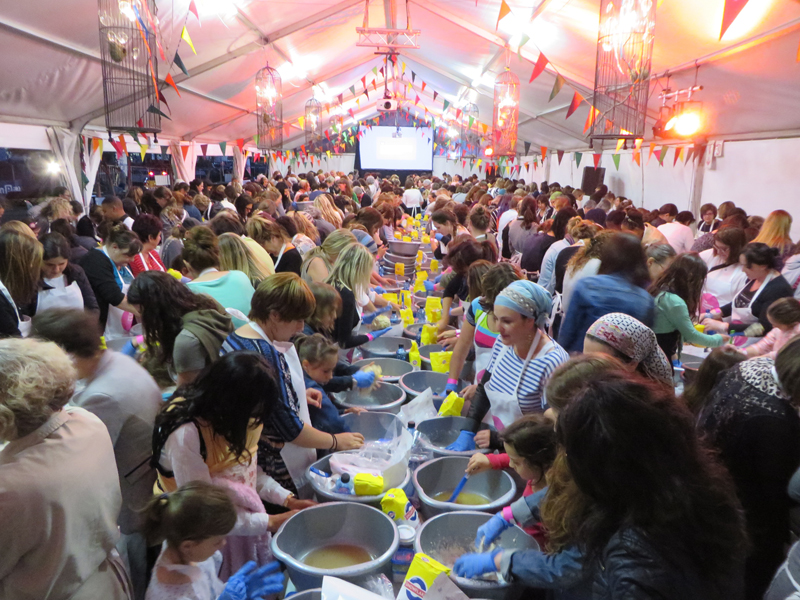 More than 1,700 Jewish women knead dough under a tent during the Great Big Challah Bake on Wednesday (Oct. 21, 2015) in Cape Town, South Africa. The event kicked off this year’s Shabbos Project, a global movement encouraging secular and religious Jews to experience one full Shabbat in accordance with Jewish law. Religion News Service photo by Brian Pellot

CAPE TOWN, South Africa (RNS) Flanked by guitars and drums, master of ceremonies Nicole Green grabbed a microphone atop the outdoor stage and shouted, “Are we ready to rock Cape Town?”

The deafening roar of approval that followed wasn’t for the band, which had already finished its set. The crowd of more than 1,700 Jewish women was ready to knead dough.

Wednesday (Oct. 21) night’s Great Big Challah Bake in Cape Town kicked off this year’s Shabbos Project, a global movement encouraging secular and religious Jews to experience one full Sabbath in accordance with Jewish law. That means no work, no phones and no cars from Friday evening until Saturday night in accordance with the commandment to “remember the Sabbath day,” variously called “Shabbat” in Hebrew and “Shabbos” or “Shabes” in Yiddish.

READ: Kerry to Netanyahu: Time for all to end inflammatory rhetoric

The project, which organizers estimate reached 1 million people across more than 60 countries in its first global iteration last October, started as a local initiative in 2013 under South Africa’s chief rabbi, Warren Goldstein.

Goldstein attributes the movement’s enormous growth — from 1,800 partner groups around the world in 2014 to 5,000 this year — to its grass-roots nature and social media appeal.

“What’s given the project real space to move at such a rapid rate is that it belongs to the people. It’s not a hierarchical organization,” he said on the phone from Israel, where he helped lay the groundwork for community events before returning to Johannesburg on Wednesday.

This week’s global Shabbos Project features yoga events and picnics in San Diego, a 3,000-person street dinner in downtown Los Angeles and major events in 560 cities around the world. On Wednesday, women in Brooklyn set the Guinness world record for making the biggest challah loaf.

In Johannesburg, 5,000 women registered for a challah bake Thursday featuring a live video link with thousands of women in Tel Aviv. More than 1,700 Jewish women knead dough under a tent during the Great Big Challah Bake on Wednesday (Oct. 21, 2015) in Cape Town, South Africa. The event kicked off this year’s Shabbos Project, a global movement encouraging secular and religious Jews to experience one full Shabbat in accordance with Jewish law. Religion News Service photo by Brian Pellot

The Shabbos Project has taken on a life of its own in South Africa since 2013. U.S. and U.K. phone lines are routed to a bustling office in Johannesburg where 20 staff field questions from global partners in eight languages.

“This ancient biblical institution…has incredible modern relevance,” Goldstein said. “That’s what has made the project sticky.”

Chani Hecht, who is married to a local rabbi and always keeps Shabbat, said part of that modern relevance is a desire to momentarily disengage from modern technologies.

“It’s daunting for people who don’t usually keep Shabbat to switch off on a weekly basis, but as a once-off, just to have that experience of really spending quality time with family, friends and your community, it’s priceless,” she said.

South Africa is home to about 75,000 Jews, most of whom live in Johannesburg and are of Lithuanian descent. Many consider themselves to be simultaneously Orthodox, traditional, Zionist and secular. They eat kosher, but only at home. They join family for Shabbat meals but don’t turn off their cellphones. What might sound like paradoxes in Israel or the U.S. are just part of Jewish life here.

“What’s changed is the psyche of the secular Jew in South Africa,” he said. “The Shabbos Project has become part of their calendar, like Rosh Hashanah. It’s like an extra day of Jewish connection and Jewish Identity. There’s a different energy in the air; it’s palpable.”

The warm aroma of rising yeast wafting over hundreds of chattering women is an integral part of that connection.

“A lot of people have different ideas about religion, but this project is about Jewish unity,” she said.

Illana Melzer, who normally makes challah in a bread machine, came to the event to spend time with her mother and daughter but takes issue with its broader premise.

“If a challah bake is what counts as innovation with regard to women, we’re in serious trouble,” she said. “Women have no role in Orthodox services, and there’s a lot of resistance to any kind of innovation.”

No bread was actually baked Wednesday. Most women will wait for the yeast to rise and bake the bread Friday.

The project’s biggest competition for the attention of South African Jews this Saturday will be what Cannon called the Southern Hemisphere’s Super Bowl.

A few hours before sunset, South Africa will play New Zealand in the Rugby World Cup semifinal. Several women at the challah bake said they planned to watch the match live.

“We’re trying to encourage people to record the game and keep Shabbat, because it’s difficult to keep the game and record Shabbat,” Hecht quipped.

Susan Lazarus said there’s a workaround, one others argued violates the spirit of Shabbat.

“If someone who’s not observant turns on the TV, then you’re actually allowed to watch it,” she said.

Cannon plans to watch a recorded version of the match Saturday night with fellow community members.

“We’ll be in this protected Shabbat bubble until it ends, and they’ll turn the rugby on straight away so no one will hear the score,” he said. “It will feel like we’re watching it live, even though it’s two hours late.”