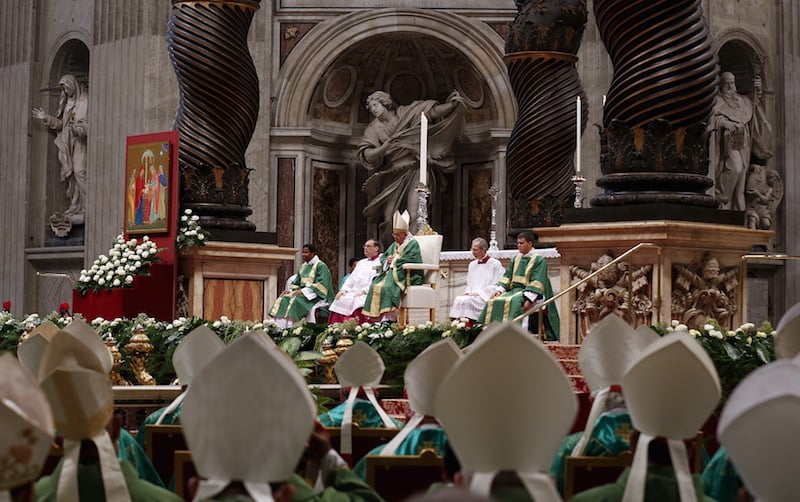 Pope Francis leads the opening Mass for the Synod of Bishops on the family in St. Peter’s Basilica at the Vatican on Oct. 4, 2015. Photo courtesy of REUTERS/Alessandro Bianchi

VATICAN CITY (RNS) The overriding interest in the global meeting of Roman Catholic bishops that finishes on Sunday (Oct. 25) has centered on whether the churchmen will actually do anything in the end — as in vote to make changes in church doctrines or policies — or leave well enough alone.

In reality, the gathering of 270 bishops from around the world, called a synod, has no authority to legislate doctrinal or other changes, and wasn’t expected to try anything that bold anyway.

Its real purpose — thanks to reforms instituted by Pope Francis — is to discuss issues openly and frankly and to advise the pontiff about what they think the church ought to do about the challenges facing families today, or, as is likely the case for this divided synod, to kick the hard questions upstairs for him to decide.

After three weeks of often contentious debate, that’s probably what will happen with, for example, the tug-of-war over finding a way for divorced and remarried Catholics to receive Communion, a focus of media coverage.

But a lesser-noted aspect of the debates, and one that could have as powerful long-term impact as any doctrinal reform, is the argument over the language church leaders use when they speak about those whose lives don’t track the Catholic ideal:

“If you say that an act is disordered … you’re saying that I am intrinsically disordered. And at that point you have alienation and a sense of exclusion,” Australian Archbishop Mark Coleridge told reporters at a daily press briefing.

“Can we find a way of saying the same thing that, in fact, is positive, less alienating, less excluding and more accessible to many if not most people?” said Coleridge, who has been an advocate of dispensing with what he blasts as “churchspeak.”

Many cardinals and bishops here have echoed that view, though most insist that they want new language as a means to effectively communicate with the modern world and not to signal any change in church teaching.

Philadelphia Archbishop Charles Chaput, one of nine U.S. delegates to the synod and a churchman closely identified with the conservative camp, has been wrestling with the semantics of using the phrase “intrinsically disordered” to talk about gays and lesbians.

“I think it’s probably good for the church to put that on the shelf for a while, until we get over the negativity related to it,” Chaput told the Catholic news site Crux. “That language automatically sets people off and probably isn’t useful anymore.”

But Chaput also stressed that any alternative language could not obscure the point that “same-sex attraction is not part of God’s plan.”

READ: Women fear their voices will be sidelined in Catholic synod’s final report

It may be a hard trick to pull off. While progressives looking for more concrete reforms might dismiss a change in language as a matter of “mere rhetoric,” language affects practice, and practice shapes belief. “Words creates worlds,” as Coleridge likes to say.

Indeed, that was a central lesson of the Second Vatican Council, the historic gathering of bishops that ran from 1962-65 and set Catholicism on an entirely new course, changing — or developing, as theologians prefer to say — teachings on religious freedom and relations with other churches and other faiths, among many other things.

Yet as Jesuit church historian the Rev. John O’Malley has argued, the council’s primary change wasn’t issuing a decree or tweaking doctrine. It was a shift in style, in language. Each of the 20 preceding church councils, from the Council of Nicaea in the year 325 to the First Vatican Council in 1870, defined creeds or issued decrees, setting out penalties for bad behavior or wrong beliefs.

The characteristic vocabulary of church councils was negative and condemnatory, “words of threat and intimidation, words of surveillance and punishment, words of a superior speaking to inferiors, or, just as often, to an enemy,” O’Malley has written. “It consisted in power-words.”

This was the first self-conciously “pastoral” council, one focused on praising and persuading, on using an entirely new language to speak as equals to a the contemporary world. Vatican II defined no new doctrines, issued no canons, but instead sought a new, positive vocabulary of spiritual kinship. The council’s vocabulary reshaped the church itself. “The language projected the image, and the image promoted the reality and helped it self-fulfill,” O’Malley writes.

Immediately after the council ended in 1965, a system of regular synod meetings was established to keep the spirit of the council alive and to foster collegiality among bishops and with the pope.

But the synods were soon anesthetized into predictable snoozefests by curial bureaucrats working at the behest of conservative popes. This synod, on the other hand, is seen as the closest thing to a Vatican II-type meeting since the council ended 50 years ago this coming December.

In fact, the language already deployed by so many of the bishops here has evoked the spirit of the Second Vatican Council, regardless of whether the language makes it into the final document.

And that’s also what worries many traditionalists.

READ: The ‘Blogging Bishop of Brisbane’ dishes on the real story of Vatican synod

“In our Christian heritage we received from the missionaries, there is nothing of that inclusive language,” Archbishop Thomas Msusa of the East African nation of Malawi told National Catholic Reporter. “We shouldn’t be afraid to tell the truth, even if sometimes it is painful.”

“These discussions on language are symptoms of one of the church’s disorders: searching for a new language to speak to the world instead of speaking to the world with the Church’s own language,” wrote Andrea Gagliarducci, a Vatican-watcher who writes for conservative Catholic media outlets.

How far the synod’s final document will go in pushing for new language is unclear, and whether that language will be anything more than “spiritual nosegays,” as one prelate here put it, is unknown. The words will matter, and those looking for more concrete changes may be looking for something stronger.

“My biggest worry as I read and listen here in Rome is that the synod will spend all their time on trying to put better language on old doctrines and pastoral practices,” Francis DeBernardo of New Ways Ministry, an advocacy group for LGBT Catholics, wrote in a synod dispatch.

“I hope and pray that the synod does a lot more than only look at language, and start to look at more creative ways of welcoming and affirming ALL families through new pastoral policies and initiatives.”