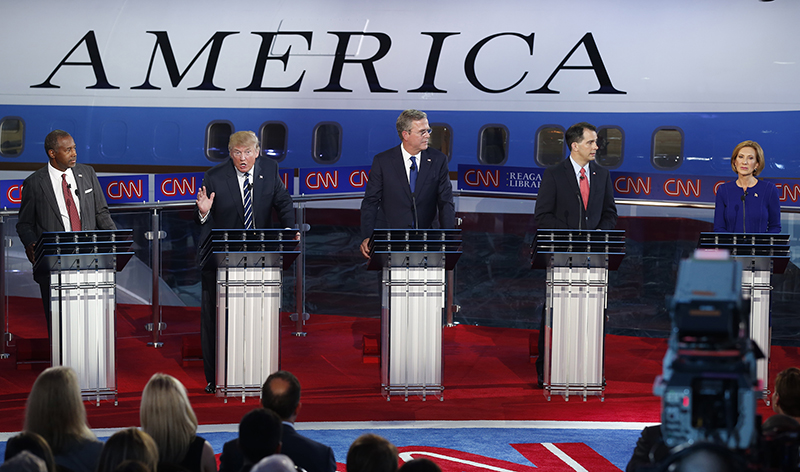 (RNS) Wednesday night (Oct. 28) is the third debate for the Republicans, and since their last stage appearance, several have been ringing the religious liberty bell from one primary state to the next.

CNBC, which is hosting this debate, says the focus will be on economic issues when the mikes turn on at Coors Events Center at the University of Colorado in Boulder.

But that doesn’t mean God talk will be muted. Didn't Pope Francis just sweep through, telling U.S. leaders about the moral dimensions of public policy?

Here's how religious issues have stacked up on the campaign trail and links to 5 faith facts about each of the candidates:

READ: 11 faith facts about GOP candidates who debated on CNN

Ben Carson and Donald Trump have turned up the volume on religious issues.

Trump had evangelical pastors lay their hands on him in blessings and waved a Bible at the annual Values Voter Summit. He also said that he, a Presbyterian, belonged to a “middle of the road” denomination, while Carson was a  Seventh-day Adventist. “I just don’t know … ” about that religion, Trump said this week, his thought trailing off.

He told NBC's "Meet the Press" that he could not vote for a Muslim president because Islam is incompatible with the U.S. Constitution. After killings at an Oregon community college, Carson dug in against gun control, repeating a long-discredited NRA claim that if Jews had had guns they might have warded off Hitler’s Final Solution. Jewish experts and historians disagreed.

“Whether they are Christians, as I am -- my faith has sustained me through some very bad times. I’ve battled cancer, I’ve lost a child, I’ve been tested. … I think faith gives us humility, and empathy and optimism. And I think those are important things.”

Former Florida Gov. Jeb Bush, despite his outreach to evangelical voters, skipped the Values Voters Summit sponsored by the conservative Family Research Council. But Bush, hoping to be the nation’s second Catholic president, did find his way to the capital to see Pope Francis celebrate the canonization Mass for St. Junipero Serra in Washington last month.

A Texas megachurch held a candidates' forum that the Fort Worth Star-Telegram called a Baptist free-for-all. Fiorina and Bush talked about their faith journeys. Baptist pastor and former Arkansas Gov. Mike Huckabee drew cheers for saying the Islamic State must be defeated “or they will kill us.”

Then, Texas senator and preacher’s son Ted Cruz fired up the crowd when he said “Our constitutional rights are under assault" and “2016 is going to be a religious liberty election.”

Ohio Gov. John Kasich hasn't appeared at those evangelicals' events. Nor did he join those willing to allow a government shutdown in order to defund Planned Parenthood, “because I don't think it's going to work out.”

Florida Sen. Marco Rubio is rising steadily in the polls, in part, says ThinkProgress.org, because voters like "spiritually fluent" candidates: "He has direct, personal affiliations with all three major pillars of the Religious Right -- Catholicism, Mormonism, and evangelical Protestantism."

Currently identifying as Catholic, Rubio nonetheless disagrees with Pope Francis on key points. The day the pontiff addressed Congress, calling for attention to climate change and income inequality, Rubio was on Fox News pointing out that Francis is infallible on faith and morals, not on politics, science or economics.

New Jersey Gov. Chris Christie and Kentucky Sen. Rand Paul are campaigning -- so far -- without making their religious views a significant part of their presidential run.