Joshua Graves, the 36-year-old senior pastor of Otter Creek Church, is the author of “How Not to Kill a Muslim: A Manifesto of Hope for Christianity and Islam in North America.” Photo courtesy of Joshua Graves

NASHVILLE, Tenn. (RNS) When a half-dozen activists and community leaders sat down to address interfaith relations in this increasingly diverse heartland city, one paused before his turn to speak, took a breath and said:

“As a white, male, evangelical pastor on this panel, I guess I represent everything that is wrong.”

The speaker, Joshua Graves, the 36-year-old senior pastor of Otter Creek Church, an 1,800-member suburban megachurch, had a point. Evangelicals like him have had a rocky relationship with American Muslims.

But then again, he may also represent everything that could be right in Christian-Muslim understanding.

The reason can be found in Graves’ third book, “How Not to Kill a Muslim: A Manifesto of Hope for Christianity and Islam in North America.” Christians, he writes, need look no further for guidance in dealing with Muslims than Jesus’ parable of the good Samaritan.

In that New Testament story, a man is beaten, robbed and left for dead on the roadside. A priest sees him and walks by. So does a Levite, a member of another tribe. But the Samaritan — not  knowing the stranger’s origin or his religion — takes him up and cares for him.

“This is the creed we should be teaching our children and grandchildren,” Graves writes. “I long for the day when Christian churches are known for being on the forefront of understanding … and appreciation of our Muslim neighbors out of the conviction that we do not get to decide who is ‘neighbor’ and who is ‘enemy.'”

The book was inspired, Graves said, by his childhood in Detroit, a city whose large Muslim-American community made him aware of racial and religious tensions. It is his outline for what he calls a “bridge” between Christians and Muslims, or a “third way,” between outright hostility and lazy indifference.

“Christians have an opportunity at this very moment to lead the way on dialogue and reconciliation and resist taking our cues from the broader American culture and its talking heads on cable news and radio, who dispense fear, paranoia, misinformation, hatred and suspicion,” he writes.

During the interfaith discussion, he adds, “A lot of what I do is dismantle what Fox News does — pimping fear to their audience.” 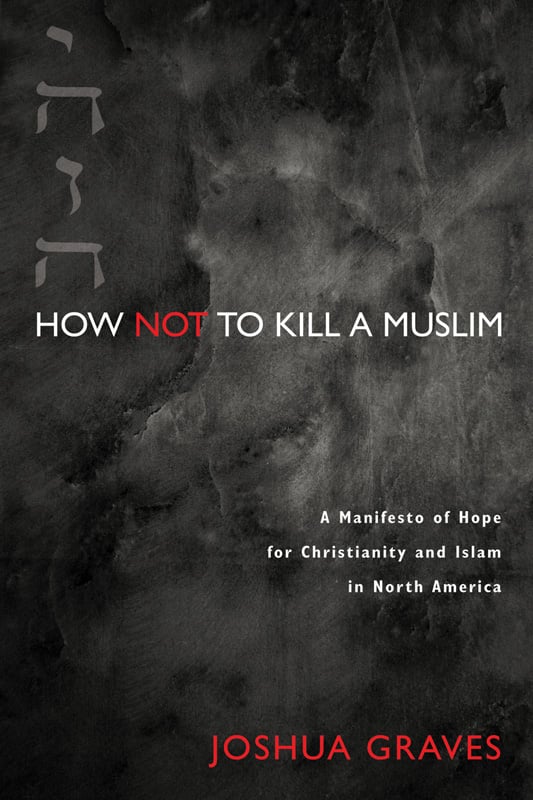 “How Not to Kill a Muslim,” by Joshua Graves. Photo courtesy of Cascade Books via Wipf and Stock Publishers

In Nashville, Graves can often be found battling that fear. He has held classes on Muslim-Christian relations at his church and brought Muslim leaders to share in the teaching. He recently spoke about the book at Abilene Christian University in Texas and is currently working with Nashville-area Muslim, Jewish and Bah’ai leaders on crafting interfaith understanding resources.

Evangelical pastors are not always so progressive about Islam. In July, Franklin Graham, son of evangelist Billy Graham and leader of the ministry Samaritan’s Purse, wrote on Facebook that the U.S. should block Muslims from immigrating. Televangelist Jerry Falwell once called the Prophet Muhammad a “terrorist” and Pat Robertson has likened Muslims to Hitler.

“Evangelical Christians and Muslims are both focused on making converts, and that’s playing out around the world and in local neighborhoods,” said Ed Stetzer, executive director LifeWay Research, a Christian organization based in Nashville. “They are, by definition, competing faiths. When you combine that with distinctly different worldviews and understanding of God, evangelicals and Muslims start with a cultural and religious chasm between them.”

Tennessee has also had its share of Christian-Muslim tensions. Earlier this year, two Tennessee sheriffs made public remarks perceived as anti-Muslim, and the Islamic Center of Murfreesboro — about 30 miles south of Nashville —  was vandalized and burned during its construction before eventually opening in 2012 with support from both Jewish and Christian groups. Opponents battled the Islamic center all the way to the Supreme Court, which declined to hear the appeal.

And in January a Vanderbilt University professor wrote a column in The Tennessean about Islam that some considered hate speech.

But Nashville, which is sometimes called the “Protestant Vatican” because of all the Christian publishers and denominational headquarters in the city, has enjoyed some interfaith successes. In 2009, voters rejected an English-only ordinance, and earlier this year, then-Mayor Karl Dean created a “Diversity Advisory Committee” for city government. About 40 percent of Nashville residents identify as evangelical, according to the mayor’s office, while it also has the largest Kurdish community outside of Iraq.

READ: East-West Travelblog: From ‘atheist’ to ‘Christian’ over breakfast

Paul Galloway, executive director of Nashville’s American Muslim Advisory Council, said Graves’ ideas can only benefit Muslim-Christian relations in the city and beyond.

“I think he is courageous and important,” said Galloway, who also spoke at the interfaith gathering held at Casa Azafran, a community center that frequently hosts such meetings and other interfaith events in the diverse community around Nashville’s Nolensville Road.

“I really think only legitimate Christian scholars or leaders — people with authentic Christian credentials — can reach certain parts of the anti-Muslim audience.”

Reaction to the book has been largely positive, with praise from several major evangelical theologians and pastors. But Graves has also received hate mail since the book’s April publication, and some members of his church have told him they disagree, he said. But what about the book’s title? Isn’t it off-putting? When Graves polled his friends about it, there was a sharp divide. His Christian friends were worried — too provocative, they said. But his Muslim friends loved it. One with whom Graves had lamented the plight of Egypt’s Coptic Christians said, “I hope there is a Muslim in Egypt writing a book called ‘How Not to Kill a Christian.'”

“Boom! That’s exactly what I am talking about,” Graves said, recalling the comment. “We, as Christians, have to model our treatment of Muslims on how we would also like Muslims to treat Christians.”

Aisha Lbhalla, founder of Nashville’s Muslim Women’s Council, said she loves the title. Killing Muslims, she said, “is what some people want to happen to us.”

“He is attempting to address these stereotypes, these misconceptions, that divide us,” she said. “And he bases it on the conduct of Jesus and the good Samaritan. That can only be beneficial.”