Alex Cooper was fifteen years old when she came out to her parents as gay. Up to that point, much about her California childhood was typical. The youngest of six children in a staunch Mormon family, she had gotten into some trouble with her parents, but until she identified herself as a lesbian, they allowed her to continue living at home.

Not after that. “They flipped out,” she says now, six years and many tears later. “I mean, I expected them to flip out, but my dad couldn’t look at me, and my mom couldn’t even talk to me. I just felt I was such a huge disappointment. They cried a lot.”

Then they kicked her out of the house with no money and no plan.

That was, as she explains in her new memoir Saving Alex, releasing tomorrow from HarperOne, when her real nightmare began.

Alex’s parents stayed in contact through another family in the ward, and communicated that they were going to pick her up and take her to visit her grandparents in St. George, Utah, for a while until things calmed down. Fair enough, she thought. She went along with this and was surprised to find that when they arrived in St. George, they pulled up at another house entirely and her parents announced that this was where Alex was going to be staying.

“They were total strangers,” Alex says. “My parents just signed over custody to them in front of me. And I knew that my parents had never met these people before.”

This was to be “conversion therapy,” an ad hoc program intended to turn Alex into a heterosexual through shame and punishment. She had to surrender her phone and was forbidden to have contact with her family or anyone in the outside world. At first she thought she was going to be able to run away with little difficulty, but to no avail.

Instead, she was subjected to routine punishments like “the wall,” where she was forced to stand at attention for hours in full view of the other members of the household “so that I could concentrate and focus on what I was doing wrong and what I needed to do to fix it.”

While she stood there, her captors would hurl insults at her like “dyke” and tell her she would never fit into the Plan of Salvation as a gay person. 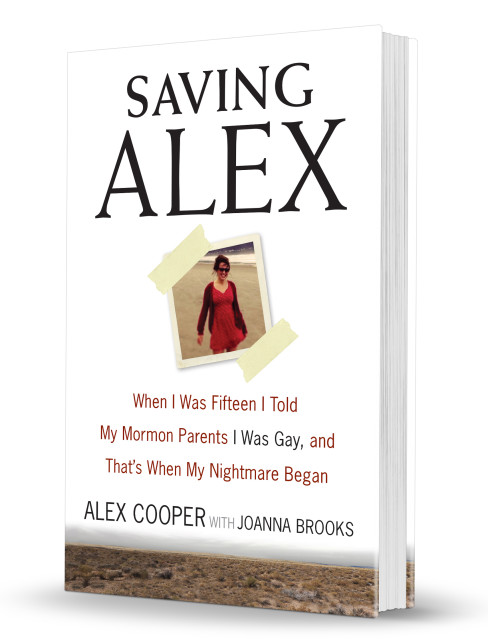 “They had this weird idea of the Plan of Salvation, which wasn’t what I learned growing up,” says Alex. (And which is not accepted Mormon belief.) “They said that if I didn’t get into the Celestial Kingdom with my family that a copy of me would be made so my parents wouldn’t have to suffer. My parents would just have a copy of me. I would be forgotten.”

Feeling despair and having no way out, Alex did the only thing she could think of: on her sixteenth birthday, as a present to herself, she attempted suicide. “I thought if I didn’t die, they would have to take me to the hospital,” she explains. “But they didn’t.” In fact, the Sialeses didn’t even tell Alex’s parents about the suicide attempt until much later.

They did take her to see the local Mormon bishop, who did not call the authorities. “He told me that he knew that they had a certain way of disciplining their kids, and it seemed to work.” Alex was held against her will for ten months.

As for her own parents, they have had a 180-degree turnaround. “My parents are awesome right now,” she says. “They have apologized, and feel really guilty about it. They are super-supportive. They just want to help. I live with my girlfriend and we Facetime my parents probably twice a week.”

Now she lives in Portland and works at nonprofit where a lot of LGBT kids in crisis seek help.

As for religion, Alex is taking a break right now. “I’ve completely removed myself from contact with the Mormon Church,” she says. “I had a lot of hope that the Church was progressing, but with [the LGBT policy change in November], I just want nothing to do with the Church. I know how unsafe it is for LGBTQ youth in Mormonism, but especially now since November. It’s not going to get any better, which is terrifying.”

These sentiments are echoed by her co-author and friend, Joanna Brooks, who helped Alex to write and publish her story. “I think it’s important to be clear that as a community, we are not making it better for LGBTQ youth who are LDS,” says Brooks. “There are very real costs to not making it better. And no Mormon youth is disposable. That’s not what the Plan of Salvation is about. No one should be subjected to what Alex was subjected to because they don’t fit our mold.”

“So it’s time for a difficult conversation within Mormonism, and it’s nerve-racking and brave for Alex to be willing to offer her story. I’ve told her, too, that as she tells her story she’s going to meet so many people along the way who will stand with her and will learn from her and benefit from her courage.”