On June 26, churches across the country will mark National Refugee Sunday, saying prayers and raising money to help the many people fleeing conflicts around the world. This is the first in a three-part series that looks at evangelical Christians’ complex views of the global migrant crisis as well as how refugees are reacting to evangelical outreach.

(RNS) Ask Wah Nay Htoo how an evangelical church helped her refugee family after they arrived in Colorado and her list is long.

“Oh my goodness, Cornerstone helped our family a lot — everything,” said Htoo, 38, a Burmese woman who lived most of her life in a refugee camp in Thailand before moving to the Denver suburb of Lafayette in 2008.

The church helped her kids enroll in school and do their homework. A member of the church with a landscaping business hired her husband. “And for me, Cornerstone helped me to find teachers to teach me English,” she said. 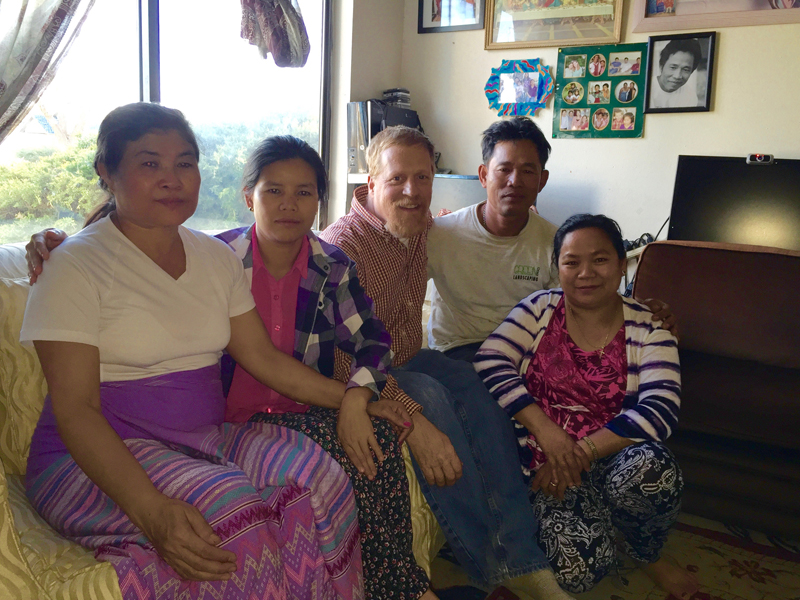 Although evangelism is the lifeblood of evangelical Christians, some say service is too, and though both may drive their efforts as they reach refugees, care comes before — and, sometimes, without conversion.

“When I serve in a local elementary school or when I serve people like refugees,” said Andy McCullough, a pastor of Cornerstone Church in Boulder, “we feel like as a church our first step is to serve, and to do that not so that they’ll become Christians, but because we are Christians.” 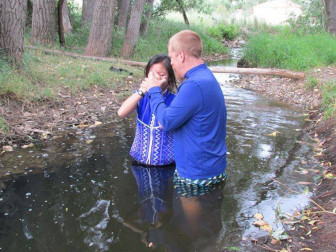 Htoo, who was a Christian before she came to the U.S., said her husband, a former Buddhist, became a Christian convert at Cornerstone about a year after their arrival.

With her new knowledge of English, she translates for a chapter-a-week Bible study that another refugee asked McCullough to lead. Four families meet every Tuesday at the couple’s Section 8 apartment — Buddhists, animists and Christians.

Sociologist Peggy Levitt said religious groups, including evangelicals, are confronting both the realities of the present needs of refugees and the future of their churches.

“If religious institutions want to remain vital, the people inside their doors need to look more like the people outside them.”

The Evangelical Immigration Table, a network that has pushed over the last several years for bipartisan immigration reform, has acknowledged all of these reasons in its documentary, “The Stranger.”

In a trailer, one Southern Baptist minister gets right to the point: “As an American Christian, is it your job, your duty, are you called to keep people who are different than you out of the United States or are you called to get them into the kingdom of God?”

That sentence could be interpreted to suggest that the point of bringing refugees to America is ultimately to have them embrace Christianity — and it’s a line that sums up the delicate balance between serving and evangelizing.

Evangelical humanitarian groups that focus on refugees and receive government funding, such as World Vision, have policies that forbid proselytizing. But leaders say opportunities certainly arise where staffers and volunteers can discuss what they believe. 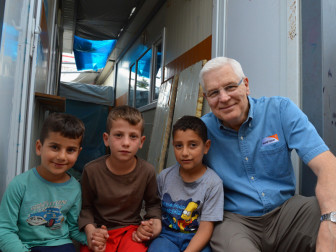 Rich Stearns, president of World Vision, U.S., sits with children in the Kurdish Region of Iraq, who have been displaced by the conflict in their country. Photo courtesy of World Vision/Kari Constanza

“The government grants don’t prevent us from talking about our faith,” said Rich Stearns, president of World Vision U.S., who said such funds can’t be used to build churches or distribute Christian literature.

“If a person says, ‘Why are you here and care?’ our staff can say, ‘We’re here because we are Christians. This is what we believe. We’re called to love our neighbors as ourselves.’ We can do that.”

Jenny Yang, vice president of advocacy and policy for World Relief, the humanitarian organization of the National Association of Evangelicals, said proselytizing is not their policy and conversion is not the focus when they partner with churches in their work with refugees. 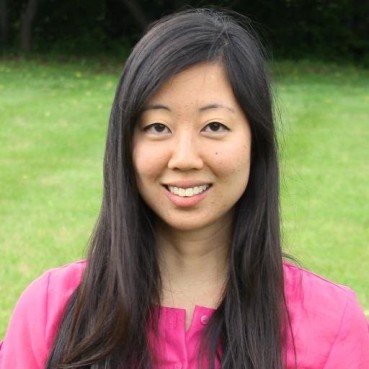 Jenny Yang, vice president of advocacy and policy for World Relief, the humanitarian organization of the National Association of Evangelicals. Photo courtesy of Jenny Yang

“It’s just the fact of loving them and welcoming them that speaks for itself,” she said. “Now, in the process of us building that relationship, do we share about what motivates us and our own faith? Yes, there’s opportunity but a lot of times we just welcome them and that in and of itself is something that we feel like we’re called to do.”

Church-state separationists, who successfully pushed for stronger federal rules on protecting the religious rights of beneficiaries of government-funded programs, remain wary of the motivations of some faith-based groups that work with refugees — a population that often has limited English skills and little knowledge of their rights.

“The federal government has a duty and, I believe, an obligation to protect this vulnerable population,” said Rob Boston, spokesman for Americans United for Separation of Church and State. “It can best do that by limiting grants to groups that want to help, not preach.”

Like other evangelicals, Southern Baptist pastor and author J.D. Greear, who has hosted a Buddhist couple from Myanmar at his house for two weeks, said his approach is two-pronged: be a good neighbor and help people with housing, food and other physical needs — but speak of your belief in Jesus’ saving grace, too, if possible.

“Even if we know that there’s not a chance that we can share the gospel, even if we knew there was not that chance, we would still do it,” said Greear, pastor of The Summit Church in Durham, N.C.. “In fact, for us, the couple that came from Myanmar couldn’t speak a word of English so there was not a lot of gospel conversation happening while they were there.”

More than 600 members of The Summit Church, which  draws 10,000 on weekends, have been involved in World Relief’s refugee programs and at least 80 have joined teams to help refugees since October.

Some refugees and evangelicals move beyond the initial stage of helping into strong friendships.

When Bushra al-Shalah left Iraq in 2014, her husband was a marked man, threatened for working as a supplier for the U.S. Army. Her family of seven didn’t know a soul in Spokane, Wash. But now, her family shares barbecues and birthday parties with Lisa Mularski and her family.

Mularksi, 42, a World Relief volunteer and a member of a Foursquare congregation, said they shared “jump-up-and-down excitement” when al-Shalah passed her driving test on her second try: “It’s really about being someone’s friend.”

READ: Why evangelicals are torn about admitting refugees to the US

Al-Shalah, 39, a Shia Muslim, has visited Mularski’s church once but practices her faith at home because there are no mosques nearby. The two women say they focus on joint family activities rather than their faiths.

Evangelicals report that their example can lead non-Christian refugees to convert or to be open to learning more about the Christian faith. Kelli Czaykowsky, who runs a Clarkson, Ga., ministry that provides refugees with scholarships to attend Seventh-day Adventist schools, aims to help Christians and non-Christians alike. But many of the kids she has worked with — 53 in the recent school year —  have converted.

“So far, in the last five years, I think about 20 kids have been baptized,” Czaykowsky said of former Buddhists who have come to the U.S. from Myanmar.

“We don’t pressure the kids but they’re surrounded by love every day and Christianity through the school system and all the kids feel that and then they start asking.”

Parents sometimes convert when they see onetime strangers caring about their children.

“I think when you really are doing it for the right reason, out of love, people see that and they’re drawn to you,” said Czaykowsky, 42, president of Friends of Refugees Providing Education and Empowerment. “The doors will open automatically.”

Not all evangelicals are as welcoming of all refugees, however. For example, studies show fewer than half of white evangelicals support allowing Syrian refugees, most of whom are Muslim, into the U.S.

Evangelist Franklin Graham, whose Samaritan’s Purse relief agency works with Muslims overseas, agreed with Republican presidential candidate Donald Trump that “Muslim immigration into the United States should be stopped until we can properly vet them.”

But McCullough, 52, the Boulder evangelical pastor, takes a different view of refugees who may not share his faith.

“The Good Samaritan was a Samaritan and he helped a Jew,” he said. “I think we can cross cultural and religious boundaries just to do good, just to help people. And that‘s what it means to follow Jesus.”