(RNS) The Rev. Cynthia Meyer has been placed on an involuntary leave of absence after coming out as a lesbian earlier this year to her rural Kansas congregation.

The leave allows Meyer, a United Methodist minister, to avoid a church trial and comes after she met for more than 12 hours on Monday (Aug. 1) with those involved in a complaint against her, according to the denomination’s Great Plains Annual Conference.

“I am heartbroken, as I agree to give up the right to serve in ministry as an Elder in The United Methodist Church for an undetermined time,” Meyer said in a written statement released through the Reconciling Ministries Network.

“Even as I agree to this resolution, I assert that it is not just and furthers the harm inflicted, not just on me, but on all LGBTQ persons in the church. Again we are told, ‘you aren’t equal; you aren’t good enough; you aren’t of enough sacred worth to serve as an ordained leader in your church.'”

Meyer’s leave from her position as pastor of Edgerton United Methodist Church near Kansas City, begins Sept. 1 and will last through the next worldwide General Conference in 2020 — or sooner if the denomination convenes a special session of the General Conference to resolve its position on the full inclusion of its LGBT members.

At that time, she can accept an appointment to a church, submit to a church trial or take advantage of any other provisions the General Conference may make. 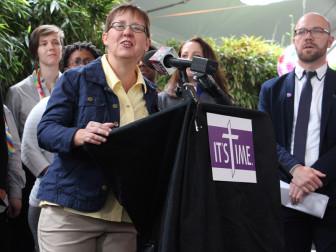 The Rev. Cynthia Meyer speaks about the possibility of losing her livelihood after coming out to her Kansas congregation earlier this year if language regarding LGBTQ clergy in the United Methodist Church’s Book of Discipline is not changed at the 2106 General Conference in Portland on May 16, 2016. RNS photo by Emily McFarlan Miller

While on leave, Meyer cannot perform the duties of an elder in the United Methodist Church, but she will keep her credentials and can work for a church or church agency in any role a lay staff person can hold. She also will receive about a year’s pay at the start of that leave.

She had hoped for a different outcome this week, but, she said, “this seemed to be the best we could do.”

Meyer would be happy to work for a church or nonprofit or to engage in advocacy, and she hopes she’ll have the opportunity to do some guest preaching, she told RNS on Thursday (Aug. 4). She previously was assistant dean of students at Emory University’s Candler School of Theology, a United Methodist-affiliated school in Atlanta.

Meantime, she said, she’ll continue “nurturing folks and living in discipleship and growing in faith — just keep going.” Several new people will become members of the church this month before her leave begins.

“People want to be a part of a place that is open to all and bringing together folks in love and trying to live in the way of Jesus rather than being overly concerned with a human book of law,” she said.

The United Methodist Church, the second-largest Protestant denomination in the U.S., bans the ordination of “self-avowed practicing homosexuals” and its Book of Discipline calls the practice of homosexuality “incompatible with Christian teaching.”

The 2016 General Conference in Portland had been set to vote on several resolutions related to sexuality. After a contentious start to the quadrennial meeting, it decided instead to defer those discussions to a commission that could lead to a special session before the next conference is scheduled to meet in 2020.

Had her church been in one of those conferences that had passed resolutions saying they would not pursue church trials against LGBT clergy, “none of this would have happened,” Meyer said. “I would simply be serving in those locations.”

In her first sermon of 2016 this January, on Epiphany Sunday, Meyer told her congregation she felt “called by God to be open and honest” about who she is: “a woman who loves and shares her life with another woman.” She was ordained 25 years ago and was appointed pastor of the church in July 2015.

Soon afterward, Bishop Scott Jones of the Great Plains Conference asked for her suspension, and the Rev. David Watson, district superintendent, filed a formal complaint against her.

In a statement on the Reconciling Ministries Network website, its executive director, Matt Berryman, called the resolution reached Monday one of “both heartbreak and hope.”

Meyer also said in a statement that accompanied the resolution that she will move forward “in hope,” adding that the United Methodist Church was in “a liminal moment, filled with possibility.”

Hope has buoyed her through the decision, she said.

“I hope that the UMC, through a fully representative, inclusive commission, then a focused General Conference, will intentionally, prayerfully remove all discriminatory language and practice from its Book of Discipline,” she wrote in her statement. “Then the Church may welcome the gifts of all who are called and gifted for ministry and all members may receive all the graces and services of the church, including marriage in their sanctuaries, performed by their UM clergy.” 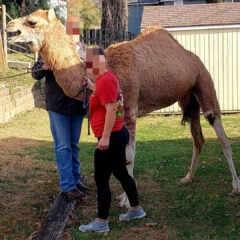