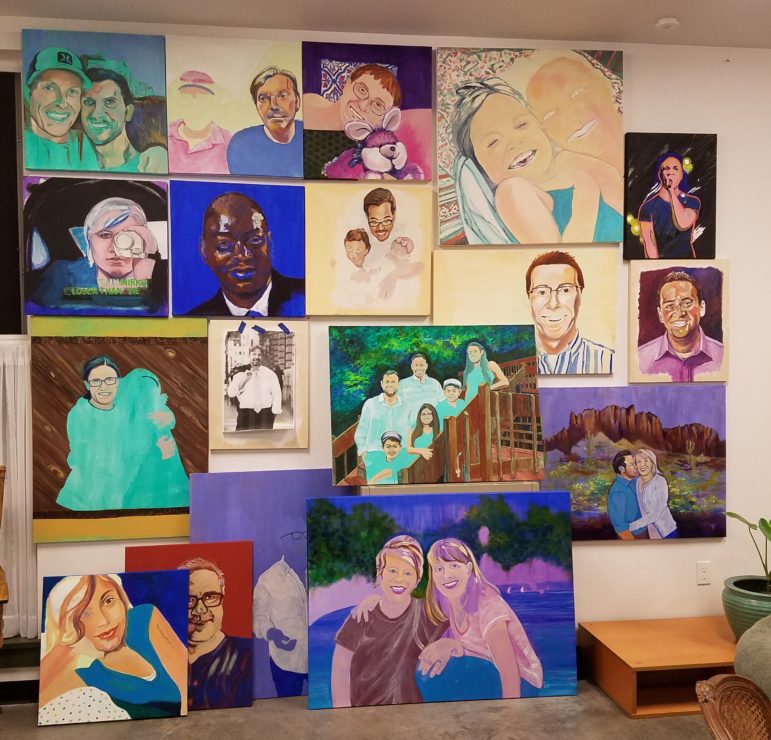 This weekend in Provo, Utah, a never-before-seen exhibit will feature art depicting LGBT Mormons who are out and proud—proud to be Mormon and proud to be gay.

The exhibit, called “The Hero’s Journey of the Gay and Lesbian Mormon” after a 2012 book by that name by Carol Lynn Pearson, will run from September 22 to 25 and is free to the public. A reception will be held from 5:30 to 7 p.m. on Friday evening, September 23, at Writ & Vision bookstore on Center Street.

The subjects of this art are individuals who walk the tightrope between living openly and authentically as LGBT people while also acknowledging and celebrating their Mormon heritage. I got to spend some time with Mitch Mayne, a gay Latter-day Saint who helped pull the show together. -- JKR

RNS: How did the idea begin?

Mitch Mayne: It came through Melinda Hannah, who is Seattle-based. She approached Aaron Brown about doing some kind of show with LGBT Mormons. She was pained greatly by the [LGBT exclusion] policy and is LDS herself. She wanted to help heal the wounds. So Aaron sent her my way. I said, “What if, instead of painting LGBT Mormons as victims, we paint them from a place of strength?”

We don’t want to ignore our reality, especially under the new policy. Yes, it is difficult, but at the end of the day there is a growing number of LGBT Mormons who are whole and healthy and integrated, and who are actively integrating their Mormon history with their LGBT orientation.

And she loved the idea. So I, also with Jerilyn Hassell Poole and Roger Sanchez, set about finding 20 or 25 LGBT Mormons—some single, some with spouses or partners—and the funny thing is it was easy. We had so many from which to choose. I think that spells great things for the future of LGBT Mormons.

RNS: Is that a change from the past, in that it was so easy to find LGBT Mormons who wanted to be seen in the exhibit?

Mayne: Back in 2011 when I took the calling [as executive secretary] in the Bay Ward, if someone wanted to talk to an openly gay Mormon they came to me—largely because I was one of the few prominent voices on social media and in the blogosphere.

Now there’s hundreds of us, probably even thousands of us. That to me is a sign that our Savior is at work here, planting the seeds among us, letting us know that we are completely fine and worthy of love and inclusion just the way we are.

If you go out today and Google “gay Mormon,” you get all kinds of things, positive things. But back in 2011, you wouldn’t get anything except maybe a smattering of reparative therapy sites. So it’s amazing to see that everywhere, in different genders and colors and geographies. I too belong in this church, and it is my home. I want every LGBT Mormon to feel that.

RNS: What are you hoping the art show accomplishes?

Mayne: For me, there is a very specific purpose for this show, and that is to counteract what I think is just an increasingly heavy and toxic environment for LGBT Mormon youth with last November’s policy.

One thing I want to accomplish is for there to be a vibrant landscape of diverse LGBT Mormons out there who don’t deny one part of themselves at the expense of another. That denial of core parts of ourselves leaves a hole in our identity, and the new policy encourages that kind of denial—it’s no wonder we have increased negative outcomes now for LGBT Mormon youth.

What this show does is demonstrate to today’s LGBT Mormon youth that there are many of us out here who are working to integrate ourselves—so there is hope for that 12-year-old gay Mormon kid sitting in the pews today who feels like he must choose between his church or his orientation. That choice—that false choice—is being eradicated in spite of the policy.

RNS: You recently wrote an article about the art show for the Huffington Post, called “Refusing to Choose.” What has been the reaction?

Mayne: This article, for whatever reason, has become quite controversial, and my inbox has become vibrantly alive with people who are very concerned and object to this notion that we can be integrated as gay Mormons. Some of these are very traditional Mormons, like this individual:

“The Brethren have spoken. What you are doing is apostasy, and God does not change His mind.  There is no way you can be a member of the Church of Jesus Christ of Latter-day Saints and actively live a lesbian or gay or bisexual lifestyle. When you agree to be a Latter-day Saint, you agree to all of the tenets of the Church. You cannot say "I will agree to do these things except…" You are hypocritical to call yourself a member of the church that excludes the way you live your life.”

I hear a lot of fear in statements like that. And I believe fear is the opposite of faith, and as a Church we have fueled fear of anything LGBT-related into almost a frenzy.

What I hear being said is that somehow when LGBT Mormons claim their space at our Savior’s table, that there is somehow less of a space for more traditional Mormons; that the eternities will somehow be less glorious, and that maybe there’s even less God available to them.

But you cannot improve the circumstances for one set of Mormons without improving them for all Mormons. I do not have to lose in order for someone else to win. There’s room for everyone inside the Mormon tent, and at our Savior’s table.