A report released Wednesday (Oct. 19) by the Anti-Defamation League does not directly indict Trump for this upswing in anti-Semitism. But it explicitly connects some of his supporters to the hate speech.

“The spike in hate we’ve seen online this election season is extremely troubling and unlike anything we have seen in modern politics,” said ADL CEO Jonathan Greenblatt. “A half-century ago, the KKK burned crosses. Today, extremists are burning up Twitter.”

The ADL found that 2.6 million anti-Semitic tweets — with an estimated reach of 10 billion impressions on Twitter — were posted on the popular social media platform between August 2015 and July 2016.

Within this group of tweets, the task force focused on 19,253 — though the ADL says the actual number could be much higher — directed at 800 journalists. Two-thirds of these tweets came from 1,600 Twitter accounts.

The top 10 most targeted journalists — all Jewish — received 83 percent of those 19,253 tweets. Among them: The Atlantic’s Jeffrey Goldberg, The New York Times’ Jonathan Weisman, and CNN’s Sally Kohn and Jake Tapper.

Yair Rosenberg, a writer for Tablet magazine — which covers Jewish news and culture –also made the top 10 list, and praised the ADL report for bringing attention to the wave of anti-Semitism targeting Jewish journalists.

“I was getting this stuff before the election. Obviously, it’s intensified,” Rosenberg said. “There’s a bunch of very vocal, alt-right, nationalist, Neo-Nazi — whatever definition you prefer — that goes particularly berzerk when Jews criticize Donald Trump.”

Some tweets are viciously and threateningly anti-Semitic. Rosenberg sometimes responds to less violent ones with humor, as he did when one Twitter user repeated the common anti-Semitic trope that Jews control the media.

@AdamSerwer So, tell me Mr. Jew… do you not admit Jews run the media? What kind of democracy has 2% controlling 90% of media?

And as have other Jewish journalists, Rosenberg has surrounded his name online with triple parentheses — co-opting an anti-Semitic code, popular among white nationalists, used to identify someone as Jewish.

Over this noted rise in anti-Semitism on Twitter, and attacks on Jewish journalists in particular, the ADL in June formed its Task Force on Harassment and Journalism, which included journalists, deans of well-respected journalism schools and experts on hate speech.

The task force’s report found the 1,600 offending Twitter users often identified themselves as white, supporters of Trump, conservative and the alt-right —  far right-wingers, some of whom are white supremacists. The task force emphasized that it is not implying that Trump or his campaign endorsed tweets from these accounts. “Only that certain self-styled supporters sent these ugly messages.”

But Trump and his campaign have done little to dissuade his followers from such behavior, and Trump himself has been accused of trafficking in anti-Semitic tropes. 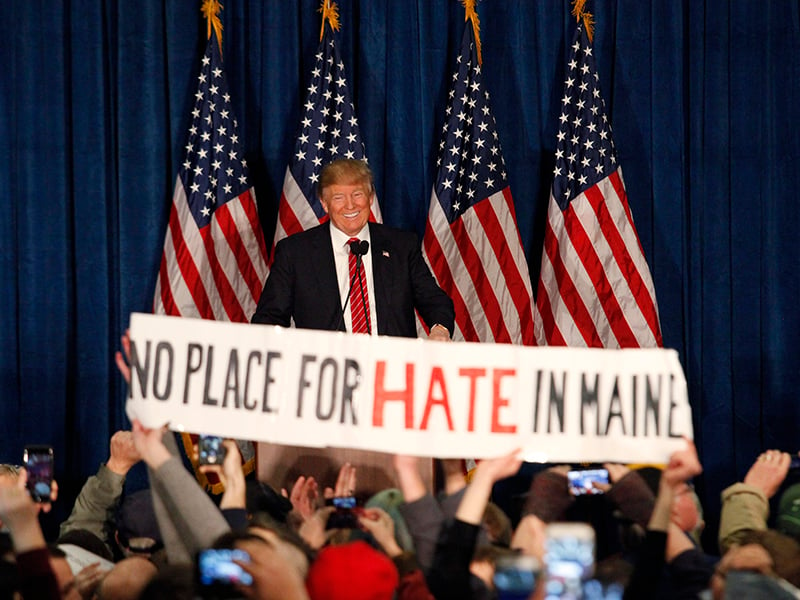 Republican U.S. presidential candidate Donald Trump smiles as protestors hold up a sign reading “No Place for Hate in Maine” during a campaign rally in Portland, Maine on March 3, 2016. Photo courtesy of Reuters/Joel Page *Editors: This photo may only be republished with RNS-ANTI-SEMITISM, originally transmitted on Oct. 19, 2016.

Among the most well-publicized examples of an online onslaught against a Jewish journalist were the death threats and torrent of anti-Semitic abuse on Twitter that Julia Ioffe received from Trump supporters after she published a profile of his wife in Vanity Fair in April. One superimposed Ioffe’s head on the uniform of a concentration camp inmate.

.@GideonResnick @OKnox Oh, I thought this one reminding me to swallow my diamonds was from you! pic.twitter.com/Ri6tZsyHXx

Melania Trump said the tweets against Ioffe were wrong, but she also blamed the journalist, saying that she had “provoked” Trump supporters.

Donald Trump at the time said he didn’t know much about the incident and that reporters should speak to the people who wrote the tweets.

Rosenberg said the online harassment does not make him scared, because he considers perpetrators “pathetic,” and on the fringes of society. Trump is “last gasp.”

“But if Trump wins,” Rosenberg added, “all bets are off.”

Greenblatt said he fears that the attacks on Jewish journalists could have a chilling effect on journalism and free speech in general. He called on Twitter to better police itself.

He notes that the ADL and Twitter have worked together on the issue, and that Twitter deleted 21 percent of the most problematic accounts. “The challenge is they didn’t suspend the other 79 percent,” Greenblatt added.

According to The New York Times, Twitter responded to the ADL report with a statement saying that the company’s policy prohibits anti-Semitic content and that it has plans to introduce new policies and tools to make users feel safe.

The Times also referred to a statement from Trump campaign spokeswoman Hope Hicks on the ADL’s findings: “We have no knowledge of this activity and strongly condemn any commentary that is anti-Semitic,” adding, “We totally disavow hateful rhetoric online or otherwise.”

Anti-Semitism has been rising in Europe — both from the right and the left — in past years with the ascent of right-wing parties and an increasing animus toward Israel that often expresses itself as anti-Semitism against European Jews. Last week, a multiparty British Parliamentary committee lambasted the leftist Labour Party for its tolerance of anti-Semitism within its ranks and also singled out Twitter as a means by which anti-Semitism is spreading.

Jews have long felt safer in the U.S., where they are at the top of the list of most admired religious groups. Still, recent studies have also shown spikes in anti-Semitic incidents on this side of the Atlantic, with violent incidents against Jews increasing 50 percent in 2015 from the previous year.