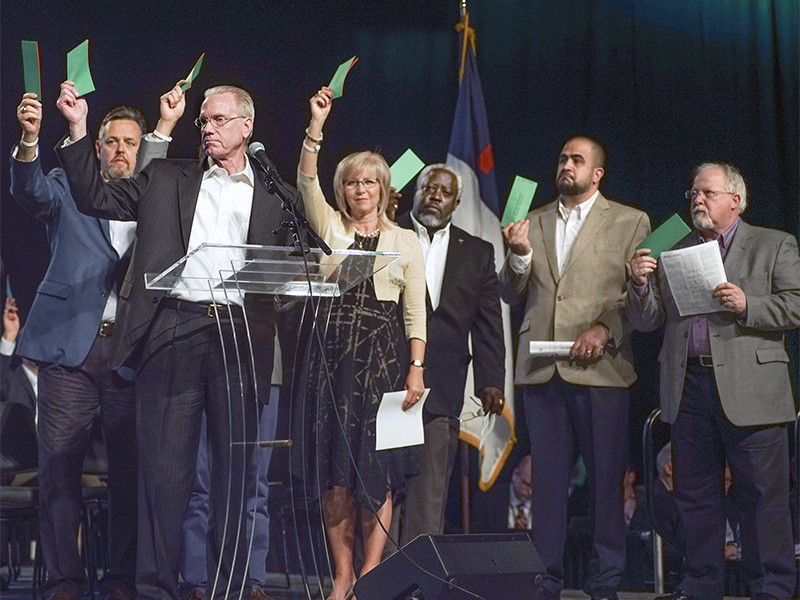 Southern Baptists overwhelmingly pass a resolution condemning the racism of the alt-right movement. Members of the Resolutions Committee that crafted the resolution, led by Barrett Duke , at podiumc, chairman, and executive director of the Montana Southern Baptist Convention, vote for its passage. Photo courtesy of Baptist Press/Bill Bangham
June 20, 2017
Martin E. Marty

In a classic essay on “Denominationalism,” Sidney E. Mead observed that “[t]he denomination, unlike the traditional forms of the church, is not primarily confessional, and it is certainly not territorial. Rather it is purposive.” When Mead published that in 1954, he was commenting on Protestantism, but in American censuses, registries, and common-sense observation, all religious bodies are considered denominational now. Still, most of these consider themselves to be in some sense “confessional,” and all tend to be more at home in some parts of the country than in other “territories.”

The largest Protestant denomination certainly appears to be confessional, and long appeared to be territorial, as its surviving name — the Southern Baptist Convention — suggests. Today the SBC makes news and has a cultural impact far beyond the South. It bids to be covered in the national media, and it is: a June 13 story by Adelle M. Banks for Religion News Service was headlined, “Faced with declining numbers, Southern Baptists focus on evangelism”; another, by the same author, announced on June 14, “In dramatic turnabout, Southern Baptists condemn white supremacy.” In the former, historian Bill Leonard, who knows as much about SBC history and trends as anyone, was quoted: “People still are converted and they still have this strong spiritual emphasis but the culture has changed so that that message attracts the attention of fewer and fewer people.” At the Convention’s annual meeting in Phoenix, Steve Gaines, president of the SBC, “implored” all members “to be evangelistic.”

The Convention, however, had something else first on its mind, namely the issue of race, which it had to take up before its participants headed home. Its leadership had “declined to bring to a vote a Texas pastor’s proposed resolution condemning the ‘alt-right’ movement,” proponents of a white supremacist culture that is attractive to some Southern Baptists and their kin and kind. But—stop the presses!—there came a sudden awakening and turn, “[a]fter a fierce backlash on social media.”

All this occasioned a radical change. The chair of the Resolutions Committee expressed regret and apologized “for the pain and the confusion that we created for you and the watching world.” The “you” included the large African-American contingent in the SBC, the majority of voters at the meeting, and, by now, many of the members of the Convention at large. The social media backlash was an indication not only of a change of heart, but also of a change in culture. It prompted the Southern Baptists to approve a strong anti-racist resolution. No one, including the Rev. Dwight McKissic, the main drafter of the original resolution, thinks the battles over racism within the SBC are over—social media reveal how wide and wild are the forces which still have to be described as racist—but McKissic said: “I think we’re back to a good place after a 24-hour roller-coaster ride.”

He had a right to interpret the sign of the times as encouraging. The anti-alt-right vote was “thunderously” supported by the delegates, who were soon to go home to face the chaotic political and racial scene, and the SBC got positive press coverage, though the racist forces had their own social media outlets in which they vented. Those (of us) who are chartered to observe and comment on American religious life can now say openly, “some of my best friends are Southern Baptist,” and have people to whom to point, beginning with Pastor McKissic. The statement passed by the Convention called “alt-right white supremacy” something “antithetical to the Gospel of Jesus Christ.” That is appropriately strong language, which had been muffled a day or two earlier.