(RNS) — As we close out 2019, Mormons the world over are scratching our heads about what the heck to do with the Book of Revelation, which is our scripture topic for the month of December.

“As you read Revelation 12–22, look for parallels between what John saw and what you see in today’s world,” says this week’s curriculum for members of the Church of Jesus Christ of Latter-day Saints. “Seek spiritual guidance to help you find personal lessons as you immerse yourself in John’s symbolic language.”

According to biblical scholar Timothy Beal in “The Book of Revelation: A Biography,” this confusion makes contemporary Mormons pretty much like all Christians everywhere in every age. And yet despite our inability to fathom pictorial images of red dragons and women clothed with the sun, Christians have tended to find in Revelation whatever we want to based on the biases of our own time and place. What makes Revelation successful for this purpose is also what makes it bewildering to read: it’s so fragmented and heavily symbolic that wildly divergent groups in every age can read themselves into the text.

We seem to use it for two basic purposes.

First, we position our own particular religious stories in the text and place ourselves in the tiny minority of the human race who are depicted in Revelation as doing stuff right. Somehow, the readers who claim to have unlocked the Book of Revelation are always among the 144,000 elect people who get saved, not the other 108 billion or so hoi polloi who have ever walked the earth. For Mormons, this tendency also means that we interpret the angel in Revelation 14 as referring to Moroni unveiling the truth to Joseph Smith, and we see Revelation 7 as prophesying the restoration of the gospel (to us, conveniently enough!) in the latter days. We become the heroes of the text. And in doing this, we are utterly typical of Revelation’s other readers throughout history. 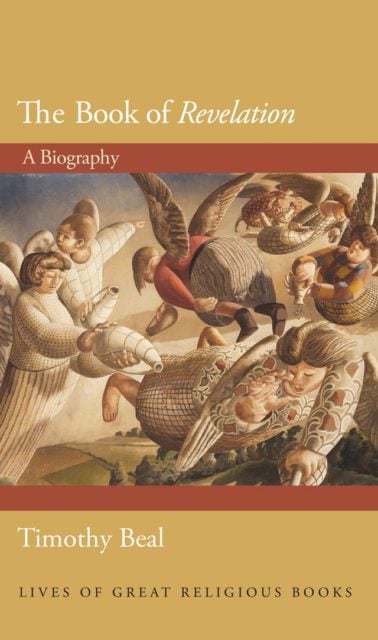 The second thing is that people weaponize Revelation to “other” the groups that disagree with us, whether it’s Luther pinning a papal tiara on the unidentified “whore of Babylon” or Americans in the 1980s noting with glee that Ronald + Wilson + Reagan evoked the number 666. I’m glad to see that the LDS curriculum doesn’t fully go there — there are no attempts to pinpoint the identity of “the beast” or call out the deficiencies of other churches. But it does leave the door open for Sunday school classes and families to have that conversation, as the curriculum asks, “What thoughts do your family members have about the deceiving beast? How do we detect and avoid deceptions we see in the world today?”

What the LDS curriculum generally attempts to do with Revelation is a fascinating reflection of our own me-centered, therapeutic era: the Bible’s most controversial book becomes a road map for each person’s very own spiritual growth. This approach manifestly does not work, but I have to admire the attempt given how disastrous some of the other interpretive directions could have been.

For example, the section discussing the letters to the seven churches in Revelation 2–3 is headlined “Jesus Christ knows me personally and will help me overcome my challenges.” Instead of those chapters narrating a cosmic good-and-evil throwdown about which churches are bad and which are beloved, per the original, this regards the letters as self-improvement vehicles along the lines of The Seven Habits of Highly Effective People. It’s all about the individual believer pluckily trying to become a better person. (The curriculum also claims that the seven individual churches represented “each branch of the Church in John’s day,” reflecting a centralized and thereby anachronistic misunderstanding of the autonomous chaos that was first-century Christianity, but … whatevs. That’s hardly the only historical issue here, since the curriculum also conflates the author of Revelation, John of Patmos, with the person who wrote the Gospel of John and the three letters of John.)

To transform Revelation from apocalyptic literature to self-help, the curriculum needs to defang the violence of the text, and it does this quite successfully. Here there be no dragons. The lessons do not talk about how God deploys angels to wipe out human beings in new and ever-more-creative ways. The curriculum’s version of Revelation has no beheadings, no lake of fire, no plagues, no moon turned to blood, no rivers poisoned by God in order to kill us, no giant locusts with the tails of scorpions and the hair of women. In fact there are few references to Revelation’s many terrifying, lethal hybrid monsters. That whole petrifying section around Revelation 9 or so is dispatched in one summary paragraph that once again brings our focus back to individual self-improvement: “As you read about the events John prophesied and watch some of them unfold, what are you inspired to do to better prepare yourself and your family for the Second Coming?”

In other words, add more pinto beans to your year’s supply of food storage.

Like I said, I’m actually grateful that the curriculum writers chose to go in this gently domesticated direction given the other possibilities at their disposal. (“Whom do you think the Lord should consign to the Lake of Fire? Why or why not?” is not a conversation I’d like to have with fellow church members.) There is more ink given here to the new heaven and the new earth of Revelation 21–22 than there is attention to the disquieting chapters that lead up to it, which are largely about how God scorched the original earth beyond recognition in the first place. The curriculum offers material about God wiping every tear from our eyes but is silent about the earlier chapters in which God is the one who gave us every reason to weep when he sent, for example, a plague to wipe out all creatures in the sea or commissioned his angels to cut down human beings in our tracks with giant sickles. It’s hard to know what to do with that.

So, how might we teach and think about this strange, dangerous book? Here’s one strategy the LDS curriculum suggests trying that Beal has experimented with profitably with his university students: draw pictures of what you read about in Revelation.

I like this idea. This particular book of the Bible is not merely a “text,” Beal says, and that’s not just because there were more than 300 different manuscript versions of Revelation floating around in the first few centuries of Christianity before the canon was fixed and this book—quite improbably given its unveiled and totally impolitic criticisms of the Roman Empire that gathered the canon—squeaked into place as the New Testament’s culminating book. It’s because Revelation is highly visual and experiential, “a multimedia constellation” of images and stories that are intended to evoke feelings more than to explicate doctrine.

I think a Gospel Doctrine class in which 20 people drew their interpretation of the same passage of this book would yield 20 completely different artistic understandings. And they would all be, in their own ways, correct. What could possibly be more reflective of our own era?

Flunking Sainthood
General Conference would be a good time for the LDS church to apologize to the Black community
Faith
What kind of people will Mormons be in a global apocalypse?
Flunking Sainthood
Second thoughts about the Mormon curriculum
News
Quitting job over 666 was ‘a blessing,’ says Christian worker
Flunking Sainthood
Mormons criticize LDS curriculum’s treatment of slavery in the New Testament