(RNS) — About 20 years ago, I officiated at a Shabbat morning service, at which a young boy was celebrating becoming bar mitzvah. He was reading from Gates of Prayer, one of the Reform movement’s prayer books.

These are the words on the page: “In a world torn by violence and pain … ”

Instead, this is what came from his lips: “In a world torn by violence and prayer … ”

Yes, he got that one right. Sometimes, prayer is exactly what tears the world apart.

Case #1: Some Haredim — ultra-Orthodox Jews — both in the United States and in Israel have steadfastly refused to comply with social distancing requirements. In heavily Orthodox Lakewood, New Jersey, there have been weddings with more than 50 people present, flouting local ordinances regarding social distancing.

The same has been true in Israel, where Haredim have actually resorted to violence, fighting police who are enforcing these policies and calling them Nazis.

To put it bluntly: These are not the nice, sweet people of “Shtisel” (though I can definitely see the brother from Antwerp getting into it with the Israeli police).

The question is: Why?

The answers are not pretty.

First, it comes from a genuine mistrust of any kind of secular state authority. At best, some Haredim view secular authorities as illegitimate. At worst, they view such authorities as hostile, as throwbacks to anti-Semitic governments — hence, horrifically, “Nazis!”

You will not be surprised that such Haredim are also anti-Zionist. Unless it is a messianic kingdom, no state will ever satisfy them.

Second, it comes from a genuine ignorance of, and hostility to, modern science and other forms of worldly knowledge.

Far be it from me to remind them that Maimonides and other sages have said that even the possibility of bodily harm overrides almost any mitzvah. And that the purpose of the mitzvot is chai va-hem, to live through them. And that Torah says “choose life.” Ultra-Orthodox Jews pray at the Western Wall in Jerusalem on March 15, 2020. Israel imposed sweeping travel and quarantine measures more than a week before, but coronavirus cases continue to rise. (AP Photo/Mahmoud Illean)

Let us note, therefore, that as of today, 44 rabbis in the diaspora have died of coronavirus — and of them, only one has been non-Orthodox — my colleague Rabbi Neil Kraft of London, who died just weeks before he was to have retired.

Forty-four rabbis. Forty-four teachers of Torah and leaders of communities. Let that sink in.

And yet, there have been many cases of genuine piety — smart, compassionate, resilient Torah. Rabbi Chaim Kanievsky, a leader of that ultra-Orthodox community in Israel, finally issued a clear ruling that the community must obey government leaders in stopping the virus. In other places, Orthodox and other traditional leaders are issuing directives, allowing the use of technology for prayer and minyanim.

And, yes — some of the returning students are sick with COVID-19. 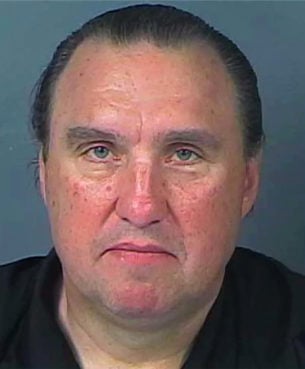 This March 30, 2020, booking photo provided by the Hernando County Jail shows Rodney Howard-Browne, pastor of The River Church. Florida officials arrested the pastor of the megachurch after detectives say he held two Sunday services with hundreds of people and violated a safer-at-home order. Photo courtesy of Hernando County Jail

Then, of course, there is the Florida pastor who believed that his megachurch was the most sterile place in the United States. The police arrested him for arrogantly and dangerously continuing to hold services in the midst of the coronavirus crisis.

Why do we have these evangelicals who are behaving so atrociously?

For the same reason as the Haredim — a rejection of science and modernity, and a misplaced hypothesis that their faith will protect them and kill all the sinners.

Case #3: Rick Wiles, a Florida pastor and founder of TruNews, said that the spread of coronavirus in Jewish communities is because of the Jewish rejection of Jesus. He had previously suggested that the impeachment proceedings against President Donald Trump were the result of a “Jew coup.”

I cannot publish my opinion of this man. If you are looking for a textbook definition and demonstration of Jew-hatred, it does not get any more pernicious than this.

But I will say this.

He is living proof that the Middle Ages is hardly ancient history. Rather, it is a perpetual state of mind, which always beckons us and tempts us — especially in the middle of a plague, which is already as medieval as it gets.

And where are the Christian leaders who should be denouncing this man’s hateful screed?

But, finally, there is good news.

Take my colleague and friend, Rabbi Daniel Nevins, the dean of the rabbinical school at the Jewish Theological Seminary.

In fact, he experienced the virus as a mild cold. May all those who are afflicted have the identical experience.

He turned that experience into an opportunity for healing.

To quote the Forward:

Nevins was tested for the coronavirus on March 12 and a week later got back a positive result. A week after that, he was tested again. Friday morning, he got the result: All clear.

Within hours, Nevins was hooked up to a machine at Mount Sinai Hospital in New York to donate blood plasma. In the race to develop effective treatments for the disease, researchers are investigating whether antibodies from the blood of people who have successfully fought off the disease may provide treatment for people … with more serious symptoms.

I continue to pray that God will watch over us, and protect us, and heal us.

But God cannot do this alone. God is not even the main actor in this unfolding drama.

Let us start to realize that, while there is still time to do so.