(RNS) — In France, a hip female rabbi has improbably developed a large interfaith online audience to her Facebook videos, in which she morally engages issues related to the pandemic.

In India, a Catholic priest draws on his skills as a former chef to mix cooking with his religious online message, and a transgender activist campaigns to secure the progress the “third gender” has made in the past five years. In the West African country of Togo, a Catholic sister has doubled down on serving people with AIDS during the pandemic. In Greece, a couple have turned their restaurant into a nonprofit that serves meals to migrants on the island of Lesbos.

These creative responses by faith-inspired social ministries, all of them chronicled in the University of Southern California’s global project on engaged spirituality, are glimmers of a moral response that we can glimpse in the catastrophe we’ve been living through. These stories haven’t gotten the coverage that the virus has received, or the endless footage the recent protests for racial justice have provoked. Yet there is anecdotal evidence that many people consider the past few weeks a time to reset, spiritually and morally. The pandemic’s shutdown has raised an awareness of what the air, seas and environment, more generally, might look like if we reduced our consumption, backed up by the deeply rooted spirituality of recent environmental advocacy from Pope Francis and from Muslims and Buddhists.

The economist Joseph Schumpeter argued that capitalism is an evolutionary process of continuous innovation and creative destruction. The coronavirus is similarly turning out to be a very messy and often painful process of restructuring our religious institutions and our moral perceptions.

For decades, we in the United States have been moving toward an individualistic ethic, politically and personally. The slogan “Make America Great Again” is offered at the expense of the welfare of other nations. Personal morality often prizes individual happiness over collective well-being.

During the current pandemic, however, I see signs of an increasing awareness of our interconnectedness. Not only is our economy dependent on global supply and export markets, but the transmission of the coronavirus and its prevention require a coordinated global response.

There is also a new awareness of the need for an integrated health care system and the importance of national leadership, rather than states being pitted against each other.

Equally important is what is happening at the local level. The pandemic has shed light on the welfare of migrants who pick our fruits and vegetables, hotel workers and house cleaners without any safety net, and the homeless, minorities and people living at the margins of society.

In my own neighborhood, people who often walked past one another previously are greeting each other on the streets. Family clans are Zooming together. Individuals are connecting on social media in heightened ways. A U.K. survey found 40% of respondents felt a stronger sense of community and connection with friends and family.

Out of the crisis — the “creative destruction” of Schumpeter — there is evolving the seeds of an ethic of care and awareness of the deeper structural issues that affect our collective well-being. The better angels of our common humanity are finding voice. In our vulnerability, we are searching for a new moral foundation. 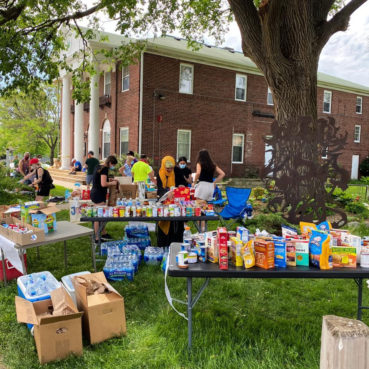 Numerous grassroots efforts are being born. People are dipping into their pantries and distributing bags of food to neighbors and local charities. Those who are feeling paralyzed by shelter-in-place rules are itching to find new ways in which they can be of service, including citizens in Colorado donating their stimulus checks through a religious nonprofit to assist undocumented migrants who lost their jobs during the pandemic.

In the Black Lives Matter movement, there is a spiritual element that has given it staying power. Some people who are agnostic about their beliefs have found themselves returning to synagogue or church to seek for deeper meaning, although I doubt that this will result in long-term religious commitment.

Creative destruction, of course, is not a smooth linear curve. There are disruptions. Not only are there business bankruptcies, but numerous nonprofit organizations may go out of business. Houses of worship are also struggling financially. Donors have less money to give; reserves and endowment have been hit hard by stock market declines, making foundations more conservative in their initiatives.

But in these challenges, there may be hope. Stanford University historian Walter Scheidel argues that social inequality has only been challenged after massive disruptions and violent disruptions of the social order, such as mass mobilization warfare, transformative revolutions, state collapse and catastrophic plagues.

Large-scale social innovations have indeed often occurred after major social disruptions. Social Security was signed into law by FDR in 1935 when poverty rates for seniors were over 50% during the Great Depression. The idea of Medicare was suggested by Harry Truman in 1945 at the end of World War II.

While I do not think we are experiencing the level of catastrophe described in Scheidel’s book, nevertheless we are seeing creative responses to our current crisis. Perhaps we are at a turning point in our history.

Like all creative destructions, there is an underside that may include violence and pain. But if Scheidel is correct, the deeper the disruption the greater the possibility for change. While religion has often been an impediment to change, as argued by Karl Marx and others, there is also a role for religion related to mobilizing people, educating them and being a prophetic voice.

(Donald E. Miller is director of strategic initiatives at the University of Southern California’s Center for Religion and Civic Culture. His most recent book is “Becoming Human Again: An Oral History of the Genocide Against the Tutsis.”)