A pre-pandemic, national survey of megachurches from the Hartford Institute for Religion Research found the median megachurch draws about 4,100 attenders to its worship services, up from about 3,700 in 2015.

Despite the decline among Christian groups overall, most megachurches seem to be doing well, said Scott Thumma, professor of sociology of religion at Hartford Seminary and director of Hartford Institute.

“They continue to do things that other congregations should be doing,” Thumma said.

Thumma said the use of contemporary worship — along with a focus on small groups and international diversity — has helped megachurches continue to grow. Megachurches, in general, he said, also tend to steer clear of controversy, staying away from culture wars or political battles. 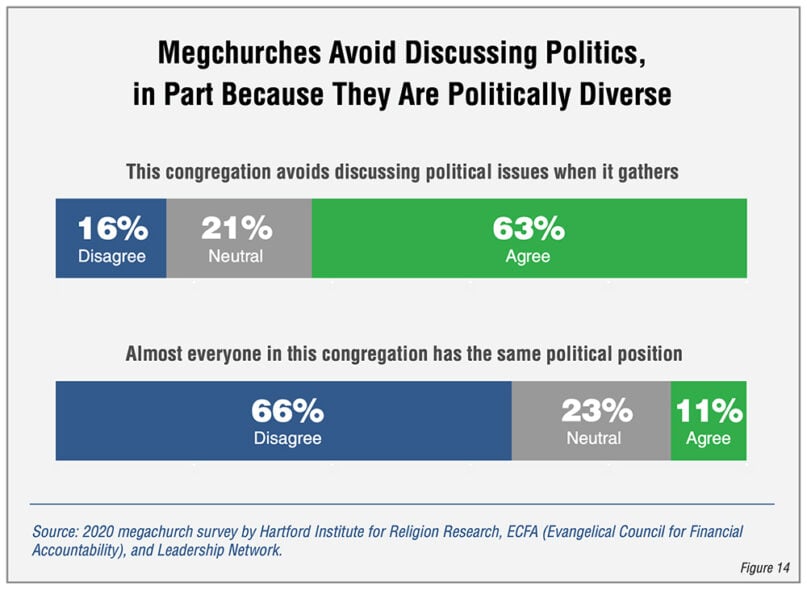 Megachurches Avoid Discussing Politics, in Part Because They Are Politically Diverse. Graphic courtesy of Hartford Institute for Religion Research

According to the survey, few megachurches said they distribute voter guides (14%) or encourage voter registration (14%), or participate in get-out-the-vote efforts. Sixty-three percent said their church avoids political discussions when they gather. One in 5 said their congregation is politically active. Two-thirds disagree when asked if “everyone in this congregation has the same political position.” 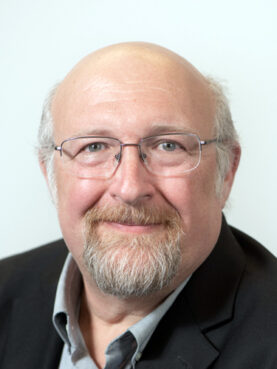 Thumma said the growing diversity in megachurches reflects the changing demographics of the United States. Megachurches, he said, also attract younger worshippers than other kinds of churches.

“Megachurches are one of the few groups of churches that have a wide representation of people under 45,” he said. People in that age group, he said, tend to be more demographically diverse and more open to diversity. More than three-quarters of the churches (78%) in the survey said they were intentionally trying to become more diverse.

Still, Thumma pointed out, megachurch pastors themselves are not a diverse group. The average megachurch pastor is a 53-year-old white man who has been in place for 15 years. And many are in danger of losing effectiveness as leaders, he said. 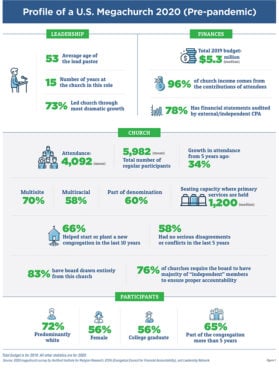 According to the survey, most megachurches experience their biggest growth when their pastor has been in place for between five and 19 years. After 20 years, the growth drops off. The survey also found that after 15 years, a megachurch’s spiritual health begins to fail.

“The gist is that the period between 10 and 15 years of a pastor’s tenure produces the most spiritually vital congregational dynamic,” according to the report. “Prior to and after that point, it is a less robust picture, on average.”

Thumma said that after 10 or 15 years, megachurches need to reassess to see if the way they are operating still meets the needs of the community around them. After that much time, things have likely changed and the church may have fallen into a rut.

“You can’t live on your charisma and assume the church is just going to keep flourishing and flourishing,” he said.

RELATED: Most congregations are doing all right during COVID-19. But the future is uncertain.

Thumma said that overall, megachurches seem to be growing less comfortable with the term “evangelical” and are more open than in the past to working with those they disagree with on theological or political matters.

“You can see them moving ever so slightly toward the middle,” he said.

The survey included 580 megachurches with an average weekly attendance of 1,800 adults and children or more, and was part of the larger Faith Communities Today study. The survey was conducted from January until May 2020. The study was conducted by the Hartford Institute along with the Evangelical Council for Financial Accountability and Leadership Network.

The full survey can be found at the Hartford Institute for Religion Research website.