VATICAN CITY (RNS) — The long-running prosecution of high Vatican officials for a real estate investment gone wrong has produced a few historic, shocking and even titillating moments, from Pope Francis’ decision to allow a cardinal of the church to be indicted to the intimations, denied by that same cardinal, that his relationship with a female security consultant was more than advisory.

But some of the most intriguing testimony came last week as Monsignor Mauro Carlino, a former official of the Vatican’s powerful Secretariat of State, raised the veil on the widely known but rarely glimpsed rivalry between the Secretariat and the Vatican bank, involving secret surveillance, alleged blackmail and good old-fashioned backstabbing.

The monsignor admitted to Vatican judges that he had commissioned surveillance of important bank officials, as well as one of Pope Francis’ closest advisers.

Culturally the Secretariat and the bank are very different institutions. The Vatican bank, officially called the Institute for Religious Works, is run by laypeople and non-Italians at that, and has tried to shake off a well-deserved reputation for financial scandal in recent years by adopting global standards of transparency and accountability.

The Secretariat, the seat of the church’s secular sovereignty, is the province of cardinals, archbishops and other clerics. It handles relations with other states, Vatican diplomacy and the government of the departments and offices that make up the Roman Curia. Its decisions have largely yielded the scandal behind the current trial.

Carlino is among 10 defendants facing trial for their part in the controversial purchase of prime real estate in London’s Chelsea neighborhood that has cost the church well over $300 million from a fund earmarked for the pope’s charitable works. Among the others are Cardinal Angelo Becciu, a former sostituto, the secretary of state’s chief of staff, and Carlino’s onetime boss, and an Italian businessman named Gianluigi Torzi. 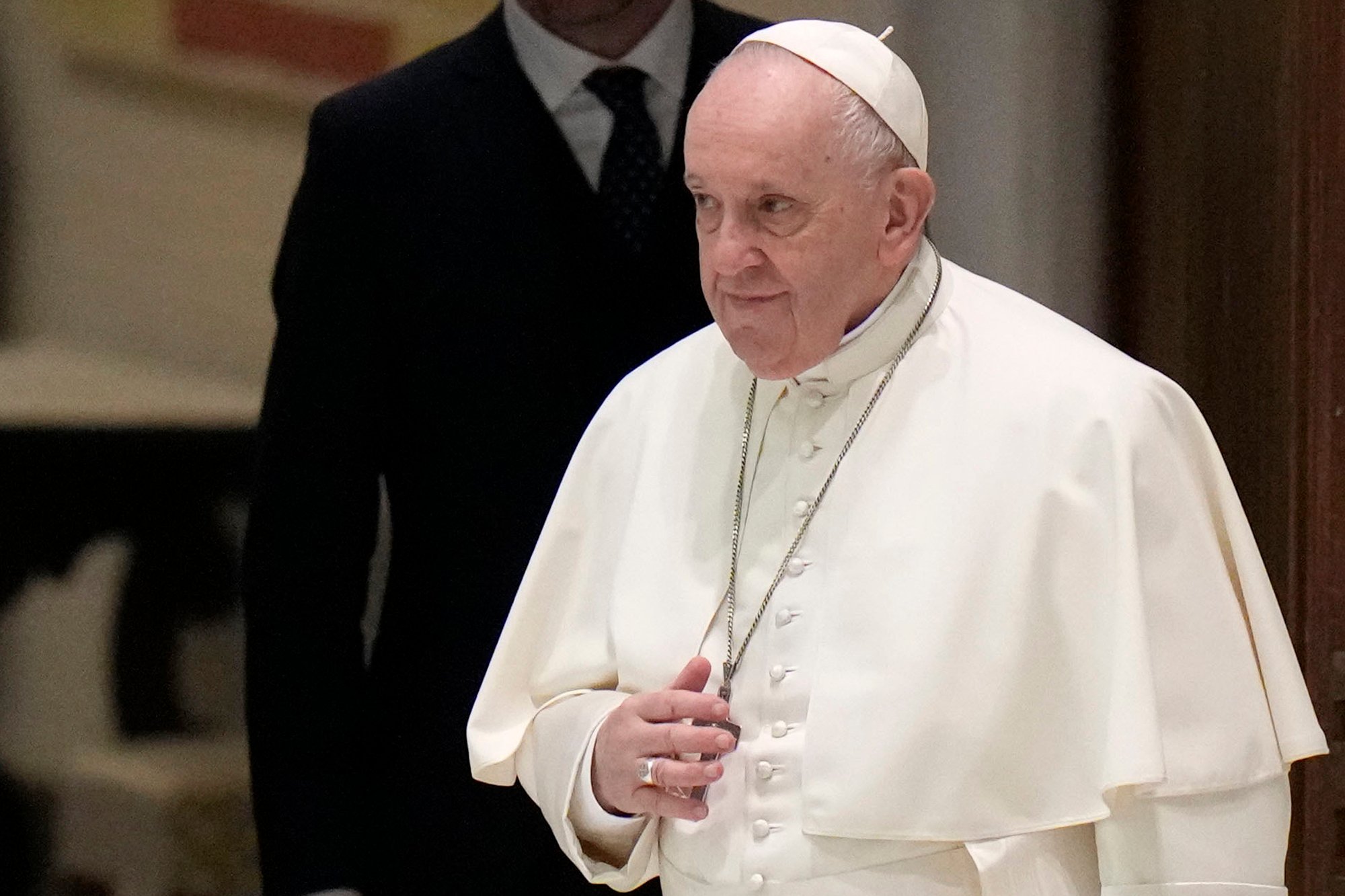 Pope Francis arrives to attend his weekly general audience in the Paul VI Hall at the Vatican on Jan. 26, 2022. (AP Photo/Alessandra Tarantino, File)

As the investment soured, Francis removed Becciu, who had overseen the purchase of a majority stake in a fund that owned the London property, replacing him with Archbishop Edgar Pena Parra. Pena Parra oversaw the Secretariat’s turbulent efforts to take full ownership of the property in Chelsea with the help of Torzi. But in brokering the deal, Torzi held onto 1,000 voting shares of the fund, giving him ultimate control over the property’s disposition.

In the spring of 2019, Pena Parra was frantically looking for a way to exit the arrangement with Torzi. He asked the Vatican bank for a loan to pay the businessman $17 million for his controlling shares as well as to pay off $120 million in debt on the London apartment house. Pena Parra’s request was seconded by Cardinal Pietro Parolin, the Vatican’s secretary of state, in a letter to the bank.

In late May of 2019, the Vatican bank’s president, French investment banker Jean-Baptiste de Franssu, approved the loan, Carlino told the judges. “The pope approved, the sostituto was happy the affair was concluded,” he said, “and then a communication arrives stating that after all (the loan) wasn’t approved.” The Secretariat spoke with the bank’s general director, Gian Franco Mammì, to salvage the situation, Carlino testified, but to no avail. On July 2, the Vatican bank flagged the “suspicious” loan request to Vatican prosecutors, who launched an investigation.

What happened between May and July of 2019 that made the Vatican bank step back from the deal remains a mystery. “The substitute asked for information” on Mammì, Carlino said, “and following the weirdness of the loan that was granted and then denied, asked (Domenico) Giani, then the commander of the Vatican gendarmes, to run some checks.”

In addition, Luciano Capaldo, an architect who acted as a consultant to the Secretariat of State on the London deal, requested surveillance on the higher-ups at the Vatican bank, according to testimonies by both Carlino and Capaldo.

People “at the Secretariat of State and Monsignor Carlino especially wanted information on Torzi,” Capaldo told Vatican prosecutors in leaked video of interrogations by prosecutors. He told the investigators that he had watched surveillance footage “sometimes even with the substitute.”

In September 2019, after the deal with Torzi was concluded, Pena Parra asked for “a dossier on Torzi from the Italian secret service,” Carlino said. Carlino admitted he had asked for surveillance of Giovanni Boscia, currently the chief financial officer at the bank, stating that the Secretariat suspected he may have had a previous relationship with Torzi or the original owner of the London property, Raffaele Mincione.

Asked by Vatican judges about cellphone messages suggesting he had “a gentleman” followed, Carlino said the chat referred to Giuseppe Milanese, a longtime friend of Francis who had handled the initial negotiations with Torzi. The Secretariat, Carlino said, was concerned that Milanese was also “in cahoots” with Torzi.

The suspicions between the Vatican bank and the Secretariat of State may be traced to a power struggle between Becciu and Cardinal George Pell, the Australian prelate whom Francis appointed to push through financial reforms in 2014, reforms that Becciu fought. Pell and the Vatican bank’s president had pushed hard to create an investment company based in Luxembourg that would have pulled the Catholic institution’s often troubled financial infrastructure into the globalized economy of the 21st century.

But Francis shot the plan down, warning in a homily at the Vatican, “When organizations take first place, love goes down and the church, poor thing, becomes a NGO and that’s not the way.”

Pell’s time as secretary for the economy at the Vatican was cut short in 2017 when he was summoned to Australia to answer charges that he sexually abused minors. He was acquitted on appeal in April 2020, but by then his tenure at the Vatican had expired. Becciu has denied rumors that he had a hand in the accusations against Pell.

But the pope’s homily and the fallout of the London realty deal show that friction between the Vatican bank and the Secretariat has as much to do with differing visions of the church: a kingdom with its roots in medieval court life or an NGO-style international institution. Carlino’s testimony points to how the curial culture of the Secretariat clashed with the globalist ambitions of the Vatican bank. The bank’s chief, de Franssu, denies that the clash exists at all: “There is no war,” he told Italian media in 2019, denying that the bank’s whistleblowing to Vatican prosecutors was an attack on the Secretariat.

But Francis’ take is more difficult to determine. Since the start of the Vatican trial, he has greatly diminished the Secretariat’s power, cutting its purse strings and removing its representative from the council overseeing the Vatican bank. His new Apostolic Constitution, “Praedicate Evangelium,” published in March, created more spaces for lay leadership in the Roman Curia, and he has long counseled the bureaucracy of clerics to see themselves as servants, and not tend their own power.

But given the choice to hand the financial management to the Vatican bank, Francis chose to centralize the church’s finances in the Administration of the Patrimony of the Apostolic See, or APSA.

Headed by Italian Bishop Nunzio Galantino, APSA remains a black box. One clue to its sympathies, however, is that when the Vatican bank changed its mind and canceled the Secretariat’s loan, APSA borrowed $150 million from foreign banks to bail the church out of the London deal.