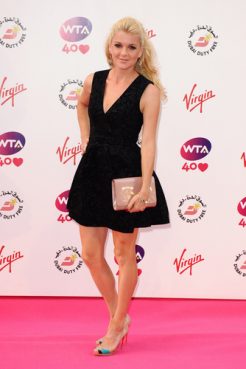 Agnieszka Radwanska, the fourth-ranked women’s tennis player in the world.

Dropped: The number four women’s tennis player in the world, from a Catholic youth movement in her native Poland. The reason? Agnieszka Radwanska posed nude for the “Body Issue” of ESPN Magazine. Radwanska says she’s a devout Catholic. The youth movement’s campaign is called “I am not ashamed of Jesus.” But I guess that doesn’t mean you shouldn’t be ashamed of something.

In California, Catholic Church officials are battling a bill that would increase the time that victims of sexual abuse have to file charges against those they accuse – a change, the prelates say, that would open up suits too old to fight.

Also in California, Prop 8 backers ask the State Supreme Court to reinstate the law, since the Supremes in Washington didn’t declare it unconstitutional. California Supreme Court: “no.”

But here’s what is unconstitutional, according to a North Dakota federal judge: a 2011 state law banning the use of a drug used in non-surgical abortions.

Reporter Mark Pinsky has covered the court beat for decades, but when he wrote this commentary on the George Zimmerman trial, Pinsky also wore his religion journalist’s hat. He writes:

As a longtime court reporter, the jury’s decision did not surprise me. As a religion writer the outcome was nonetheless troubling, no less for having seen it coming.

Here’s what the Rev. Dan Webster preached Sunday morning after the verdict declaring that  George  Zimmerman was not guilty of the death of teenager Trayvon Martin.

RNS blogger Omid Safi is none too pleased with President Obama’s response to the verdict, which Safi “calls classic pastoral Obama” but also “woefully inadequate.”

Israeli officials in Jerusalem have closed the Temple Mount – Judaism’s holiest site and Islam’s third holiest — to Jews and Christians on Tisha B’Av, a solemn Jewish holiday commemorating the destruction of the Jewish temple on the site. The holiday ends tonight, and authorities are worried that ultra-Orthodox Jews who want to see a third temple built could incite Muslims who are celebrating there for the holy month of Ramadan.

Jews are still praying at the Western Wall, the remnant of the Jewish temple, which is below the mount, but were blocked by Muslims worshippers on Monday from ascending it. Tisha B’Av celebrations in the U.S. take a different focus – read my story about the holiday and how non-traditional American Jews are marking it.

Miracle of miracles? Could it be possible that one day, in the not-so-distant future, evidence of the performance of miracles will not be required for sainthood in the Roman Catholic Church? Alessandro Speciale tells us how Pope Francis has re-ignited this miraculous debate.

Gang rape is rampant in India and is only recently getting attention. One of the latest victims, a Catholic nun — the church in India is demanding action.

In Syria, the latest shock for the Christian community is to learn the fate of a Catholic priest, Rev. Francois Murad, who was presumed dead, and is now known to have been shot to death. Reports suggest that members of Jabhat al-Nusra, a militant Islamic group that’s part of Syria’s rebel alliance, are responsible.

For those of you who appreciate writers who make their point quickly and without caveats, here’s an essay from C. Welton Gaddy and Barry Lynn, who say the belief that the military is curtailing Christians’ religious freedom “is simply not true.” And here’s Mark Silk’s take on the question.

A hoped for Ramadan ceasefire couldn’t be brokered in Syria, but one has taken hold in Buddhist-majority Thailand between the government and Muslims guerillas.

I got to hear this waiting in the carpool line yesterday: Terry Gross interviews Muslim-turned-Christian-turned-Muslim writer Reza Aslan on his new book “Zealot: The Life and Times of Jesus of Nazareth.” The book is a historical look at Jesus “in the context of his time and Jewish religion, and against the backdrop of the Roman Empire,” and I think I want to read it. If anybody has, please post a quickie review in the comment section below.

Sign up for the Religion News Roundup. We won’t charge you, spam you . . . none of those bad things. Just good clean religion news, except for the nude tennis players.