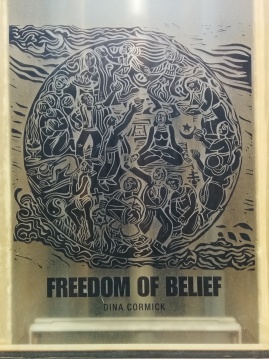 Freedom of Belief plaque at the Constitutional Court of South Africa in Johannesburg. RNS photo by Brian Pellot, 2014.

Welcome to the final Religious Freedom Recap of 2014. I’m publishing this one from sunny Cape Town, but since I spent most of last month working in Myanmar and Thailand, let’s get started in Asia.

Religion Newswriters trained 15 journalists in Myanmar how to better report on religious freedom and conflict. Why Myanmar?

Muslim Rohingya continue to flee persecution in the country’s western Rakhine State while local politicians remain silent, chiming in only to deny the atrocities or to chastize foreign leaders who dare mention the Rohingya people by name.

Myanmar’s government submitted four bills, collectively known as the “protection of race and religion laws,” to parliament. The bills, set for debate in January, would restrict religious conversion, interfaith marriage and other protected practices. Having visited Yad Vashem in Jerusalem and the Apartheid Museum in Johannesburg this year, let me just say that this is a terrible, terrible idea, Myanmar. Please go back to the drawing board.

Our trained Myanmar journalists drafted a resolution (now in Arabic and of course Burmese) to ensure that their coverage of religious freedom and conflict is fair and balanced. You can read more about the trainings in local media here and here. 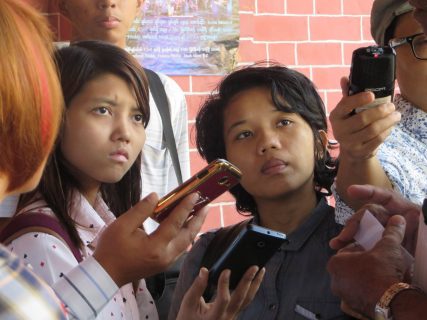 Proselytizing is pretty much protected in Japan. Kidnapping and attempting to “deprogram” people? Not so much. The Japan Alliance Christ Church was ordered to pay millions of yen in damages for its sci-fi-sounding de-conversion techniques.

As though Malaysia’s Sedition Act weren’t bad enough (trust me, it’s plenty bad), the government wants to strengthen it to further protect religious sensitivities. Lawmakers are also drafting rules to prevent the “unnecessary” seizure of Christian materials. All seizures are unnecessary if you ask me, but they’re specifically trying to clamp down on Christian texts featuring the banned word “Allah.”

Not really religious freedom, but Thai protesters are winning the internet (and my heart) with their coup selfies, sandwich parties and three-finger Hunger Games salute. The Hunger Games crowd was detained for “attitude adjustment,” which sounds a lot like toddler timeout.

Indonesian bishops are speaking out in favor of interfaith marriage, because that’s still not a thing there, because discrimination. The country’s also seeing a surge in blasphemy convictions. Come on, guys. Knock it off. All of it.

Uzbekistan, much like every other Stan, hasn’t quite grasped this whole religious freedom thing.

Hindus in Nepal slaughtered thousands of animals for the festival of Gadhimai despite animal rights protests. Americans did much the same, replacing buffalo and goats with turkeys.

Korea’s Détente on Christmas escalated when South Korea’s Defense Ministry approved a new Christmas tree tower near the North Korean border. Atheist N.K. threatened to bomb the old rusty Christmas tower that stood on the same site before it was dismantled in October.

Two Palestinians attacked a synagogue in Jerusalem, killing four worshippers. Meanwhile, Israel’s president pushed hard, and its cabinet approved, a bill that would “officially define Israel as the nation-state of the Jewish people, reserving ‘national rights’ only for Jews.” President Bibi might also want to pay a visit to the Apartheid Museum.

Not The Onion: Islamic State to mint its own currency – The Jihadist group wants to free Muslims from the ‘satanical economic oppression’ of having to use western money.

Just when you think blasphemy in Pakistan can’t get any worse, November:

Pakistan also sentenced a family to death for ‘honor killing’ a pregnant woman, which probably sounds reasonable to death penalty proponents while striking everyone else as hypocritical.

A Saudi woman was reportedly arrested for driving a Model T. Okay, it wasn’t a Model T, but when I hear that a woman has been arrested for the crime of driving I have to assume that the “crime” happened more than 100 years ago just to make it through the day.

The Vatican assembled a diverse cast of religious leaders who oppose same-sex marriage at the “Complementarity of Man and Woman” conference, finding common ground with people it already agrees with. Radical. “Complementarity” is just a euphemism for “separate, not equal,” in case you were wondering.

In a move towards actual equality, women can now officially serve as bishops in the Church of England. A majority of Brits say religion does more harm than good and that atheists can be just as moral as believers. America disagrees like woah.

Germans need street signs to know when church starts, because they don’t have memories? Or friends? Or smartphones? In any case, Nudelmesse is on Freitag at 10:00 Uhr if you happen to be passing through Templin.

This section is short because I spent most of November in Wi-Fi dead zones. Blame Burma.

So yeah, I now live in South Africa where street prophets promise to bring back lost lovers and confront you with past enemies. These signs are situated next to ones for penis enlargement and illegal abortions all over Johannesburg. 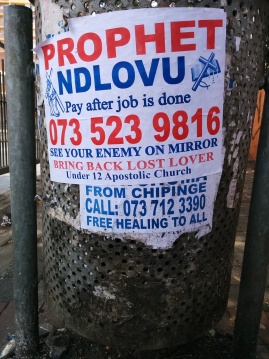 Elsewhere on the continent, Boko Haram is claiming that all those girls it stole in Nigeria have converted to Islam. I’m pretty sure conversions don’t count when you’ve been kidnapped and forced. At least 100 people were killed in a mosque attack in Northern Nigeria. All signs point to, you guessed it, Boko Haram.

Egypt has decided to crack down on “shameful, regrettable,” God-angering gay parties rather than sort out its non-functioning government and economy. Egypt was so focused on gay bashing it must have missed this boundary-pushing adaptation of “Inherit the Wind.”

Awww. The “Delicious Peace” coffee co-op is bringing together Jewish, Christian and Muslim farmers in Uganda. Peace for all! Unless you’re gay. In which case you’re probably going to jail if Uganda passes yet another anti-gay law, just in time for Christmas.

“We hate gays more!” shouted Gambia in this continental race to the bottom. President Yaya Jammeh signed a law mandating life imprisonment for individuals perceived to be LGBTI and banning “aggravated homosexualty,” whatever that means.

Someone please tell Kenya’s Catholic bishops that UNICEF’s tetanus vaccines are not being used to sterilize women and cause miscarriages.

Secular humanism is now a religion in prisons, because why not?

So your Buddhist master excommunicated you and all your friends. Sort it out, not in court.

The rule of law used to matter in America, but now I’m not so sure. Ferguson, obviously, but there’s also this thing where rogue pastors are blatantly and deliberately violating tax rules, and the IRS is just shrugging. Please change the rules or enforce them. All of them. Consistently.

Religious persecution could escalate to Nazi Germany levels!!!, warned Rick Santorum. It could, sure, but it won’t, so stop scaring everyone with your misleading hypotheticals.

Another woman wore another colander on her head for a government ID photo and that’s great but I’m bored.

Mississippi secured its notch in the Bible Belt (as though we ever doubted it) when a group launched a ballot that would change the constitution to identify the state as “principally Christian.”

If you lose your Mormon faith at Brigham Young University you get expelled, which seems harsh and totally at odds with the Church’s teachings and lobbying on religious freedom. Fake it ‘til you graduate or try to change the system, I guess.

If you want to grow a beard at BYU, get in line. The university is issuing fewer “beard pass” lanyards. How much do those go for on the hipster Mormon black market? I smell an economic opportunity.

Mormon women can now teach religion to high school and university students even if they’ve GASP had children or divorced. The fact that this wasn’t true before is obviously the real news to those not in the know.

64 countries have religious symbols on their national flags. Is yours one? Check this chart.

Is yours one? 64 countries have religious symbols on their national flags http://t.co/ho0RgW8qDP pic.twitter.com/TJO1DAdscI

It’s not one of those “all charts lead to No” charts, but “Check this chart” is so clickbaitingly awful I couldn’t resist.

Do check out our excellent series on religious tolerance and combating hate speech online.

If you just stumbled upon this recap while Googling “penis enlargement” or “bring back lost lovers” and have made it this far, consider signing up below to get next month’s recap by email. Better yet just do it, it’s not a big decision. It’s a click. Go on. Click the blue button. Click it.

Happy December to all. May 2015 bring less depressing news.

Opinion
Twitter’s ‘cancelation’ of free speech isn’t a legal question, it’s a moral one
News
What four strangers of different faiths learned while living together during a pandemic
Martini Judaism
If you’re religious and supported President Trump
Opinion
How Jewish is “Ma Rainey”?
News
How a podcast is helping this Catholic and gay Latino man break the stigma