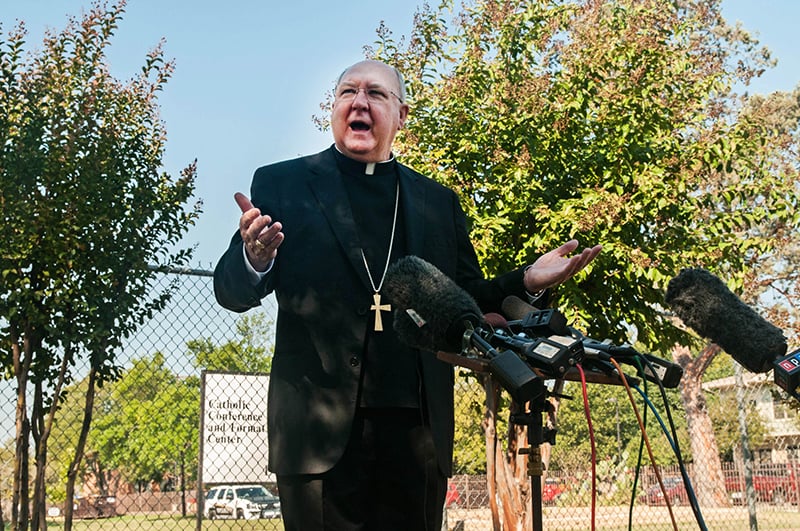 Dallas Bishop Kevin J. Farrell answers questions from media on Oct. 20, 2014, about what will happen to the diocese's building in South Dallas where Ebola victim Thomas Duncan's financee and her family were quarantined. Photo courtesy of The Texas Catholic, via Catholic New Service
January 6, 2016
David Gibson

Dallas Bishop Kevin J. Farrell answers questions from the media on Oct. 20, 2014, about what will happen to the diocese's building in South Dallas where Ebola victim Thomas Duncan's fiancee and her family were quarantined. Photo courtesy of The Texas Catholic, via Catholic New Service

(RNS) In a blistering critique of what he describes as congressional kowtowing to the gun lobby, the Roman Catholic bishop of Dallas is praising President Obama’s new actions on gun control and ripping the “cowboy mentality” that allows open-carry laws like one that just went into effect in Texas.

"Thank God that someone finally has the courage to close the loopholes in our pitiful gun control laws to reduce the number of mass shootings, suicides and killings that have become a plague in our country," Bishop Kevin Farrell wrote in a column, posted on his website on Tuesday (Jan. 5).

"President Barack Obama’s executive actions, though modest, are first steps in correcting gun laws so weak that they are ludicrous," he wrote. "Congress has unabashedly sold itself to the gun lobby. If there was ever any doubt, its recent action to kill legislation to ban people on the terrorist no-fly list made it obvious."

Farrell's remarks are notable because they are so pointed -- and his diocese is in the heart of a very pro-gun state -- but also because the Catholic hierarchy in the U.S. has come under increasing scrutiny for its reticence to speak out on gun control.

When Pope Francis addressed Congress during his first-ever visit last September, he delivered a vivid denunciation of gun violence, telling the representatives the reason weapons are so readily available is because of money -- "money that is drenched in blood, often innocent blood.”

In October, Chicago Archbishop Blase Cupich -- whom Francis personally picked for the high-profile post -- echoed the pontiff’s exhortation in a column in which he said the original intent of the Second Amendment protecting the right to bear arms had been “perverted” and the nation needed to pass tougher gun control laws like those that have sharply reduced gun violence in other countries.

Cupich and some other bishops were hoping the U.S. Conference of Catholic Bishops would vote to make gun control a priority in its public policy agenda when the bishops met the following month, in November.

But the bishops were sharply divided over how much they should adapt their agenda -- which has focused on fights over gay marriage, abortion and birth control -- to Francis’ priorities, and in the end they largely maintained the status quo.

Since then, gun massacres in places such as San Bernardino and Colorado Springs, along with the daily toll in Chicago and other cities, have prompted a few bishops to speak out and have prompted some Catholics to push them to do more.

"(W)hen it comes to the epidemic of gun violence afflicting American society, the Catholic Church has been, for some time now, largely quiet," Michael Bayer wrote in The Washington Post on Wednesday. "This needs to change."

He avoided directly praising Obama -- a longtime nemesis for conservative bishops -- and called on Congress to strengthen social services for people with mental illness.

"Violence in our society is a complex issue with many facets, taking many forms," Wenski said. "While no measure can eliminate all acts of violence which involve firearms, we welcome reasonable efforts aimed at saving lives and making communities safer. ... We hope Congress will take up this issue in a more robust way, considering all of the varied aspects involved."

Farrell's broadside this week was also informed by the new law that went into effect on Jan. 1 that allows Texans to openly carry weapons, including in houses of worship, unless expressly forbidden.

The state's Catholic bishops, as well as many other religious leaders, objected to the law and have said worshippers cannot carry arms into church. Farrell said the statute is evidence of what he provocatively called a "cowboy mentality."

"It is difficult to see how this new law allowing persons with concealed handgun licenses ... to openly carry firearms can accomplish anything other than cause people to feel threatened and intimidated."

Related Posts
By Amy Klein
What good is faith when your fertility treatments aren't working?
By Alejandra Molina
Who is Junipero Serra and why are California protesters toppling statues of this saint?
By David Crary
Amid pandemic, scores of US Catholic schools face closure
By Alejandra Molina
Four young people of different faiths move into a home together, then a pandemic happens
By Elana Schor
Gun control group starts faith-driven push ahead of election