PORTALES, N.M. (The Christian Chronicle) — Biatriz Larez knows what it’s like to struggle to feed her family.

A few years ago, the single mother and her three young children made do in a crumbling, two-bedroom mobile home.

She worked an hourly, low-wage job as a custodian.

“It was paycheck-to-paycheck living,” said Larez, who was born and raised in this Eastern New Mexico town best known for its peanut and dairy farms. “It wasn’t great.”

But her economic — and spiritual — outlook changed when a friend introduced her to Hope Haven, a faith-based duplex community built by New Mexico Christian Children’s Home.

For up to four years while single parents go to college or develop careers, the ministry associated with Churches of Christ offers free rent, utilities and internet. 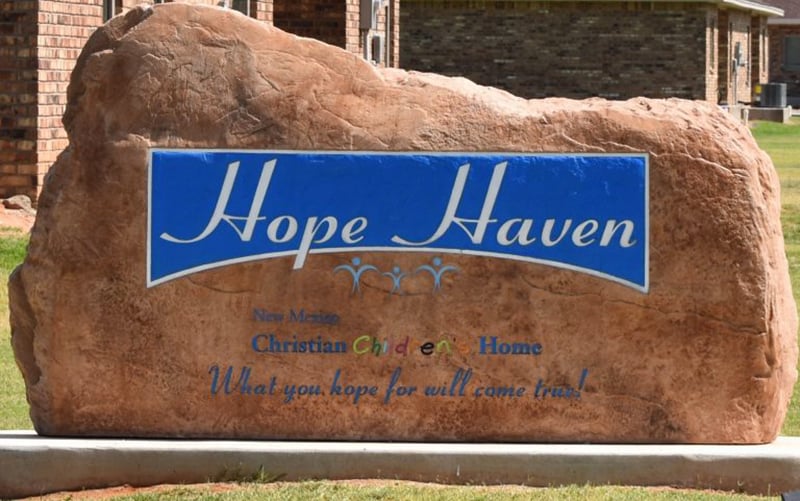 “What you hope for will come true,” says the sign at Hope Haven in Portales, N.M. Photo by Resa Mann

The families receive canned goods, nonperishables and meat through the children’s home’s commissary. They have access to a clothing closet.

Donors shower the children with birthday and Christmas gifts.

But with those benefits come expectations: No smoking or drinking. No physical relationships. No guests of the opposite sex, except for relatives.

And for many, this is the big one: The entire family must attend church services three times per week.

That includes Sunday morning and Wednesday night assemblies at the Southside Church of Christ, within walking distance of Hope Haven.

Plus, New Mexico Christian hosts a Sunday night gathering specifically for the 39 single mothers and their 73 children. The program is at capacity and has a months-long waiting list. “We don’t judge these ladies. We take them as they are,” said Marshall, a minister for 30 years and a former group home houseparent with his wife, Judy. “However, they sign an agreement that they are going to live a different standard here.”

Since the ministry accepts zero government funding, no regulations preclude that mandate.

“You can’t force anyone to believe in Jesus and be baptized,” Marshall said. “But we can ask them to come to church where they’re going to hear about that.”

Since 1954, New Mexico Christian has specialized in residential group care on its rural campus eight miles west of Portales.

The single-parent program’s roots stretch back to 1983. However, the major expansion did not occur until the construction — completed last year — of 30 duplex residences at Hope Haven.

In addition, the children’s home maintains nine single-parent apartments split between Portales and the main campus outside town.

Donors gave $6 million in three years to build Hope Haven on seven acres behind the church, which has a playground that the children enjoy all week. 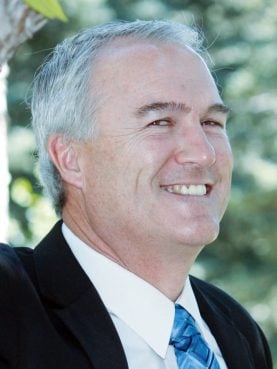 That fund-raising timeline amazed Executive Director Rod Self, whose office is in a long building where — decades ago — New Mexico Christian housed 24 boys and 24 girls at opposite ends.

“It just sounds to our donors like what the New Testament church did,” Self said of the single-parent program.

The original Greek wording of James 1:27, Self noted, refers to pure religion as caring for widows and “the fatherless” in their distress.

“We waited for the Lord to provide the money first,” he said of building Hope Haven. “I’m not sure how much faith that is. But we were just amazed to see what God wanted to do through his people.”

The program allows single fathers as well as mothers, but all but one participant so far have been women.

“I’ve had many who have left with their degrees in nursing, education, accounting or whatever,” he said. “I know that many of them make a whole lot more money than me. And that blesses me.”

In many cases, the children’s fathers have no role in their lives.

Some have abused the mothers.

Others are in prison.

The women’s ages range from 18 to 50, although most tend to be in their 20s and early 30s. The majority are Hispanic, in keeping with New Mexico’s overall demographics.

The southwestern state’s poverty and teen birth rates both rank among the nation’s worst. Four out of five New Mexico teens who give birth are Hispanic, according to the U.S. Census Bureau. 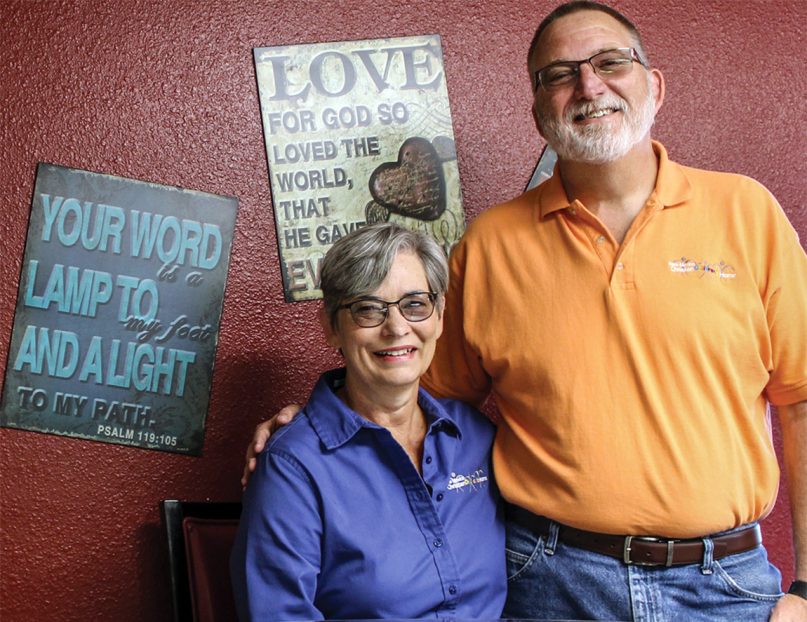 Regardless of the scenario, New Mexico Christian’s staff members never characterize any of the women or their life choices in a negative way, said Allen Mann, the home’s director of public relations.

“They only refer to them as the ladies that we serve and the families that we serve,” said Mann, whose wife, Resa, works alongside him at the home. “I just think that’s beautiful. That’s the way Jesus would look at it.”

Larez — mother of Alejandra, 11; Lexie, 8; and Zacarias, 5 — has no contact with her daughters’ father, who was deported to Mexico.

She split up with her son’s father.

After the family moved into a new duplex at Hope Haven in 2017, her sister suffered a stroke. So Larez took in nephew Dametrio, 15, who helps care for his cousins. 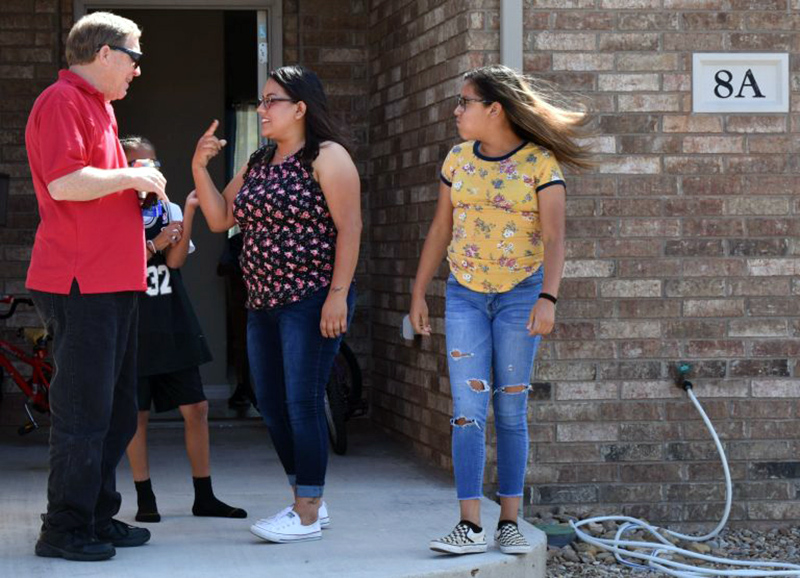 Larez works a full-time office job while taking a full load of courses at Eastern New Mexico University, where she’s majoring in psychology.

After earning her bachelor’s degree, she hopes to attend graduate school and become a children’s counselor.

Along with all that, she satisfies the requirement to attend the three weekly church services.

“I’m not going to lie,” Larez said. “It was hard to get into that routine when I first started.”

But now she’s used to it — not only used to it, she said, but she enjoys it. Her children love it.

“Just being able to grow in Christ and seeing my kids grow in Christ,” she said of what she likes about it, “it’s an awesome feeling for them to come out of class and tell me what they’ve learned.” 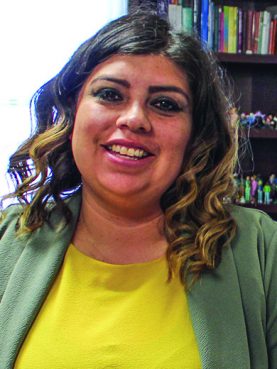 The program benefited Sandra Caldera, now the director of adoptions and counseling at the children’s home. Photo by Bobby Ross Jr.

Sandra Caldera, 35, lived in one of the single-parent apartments for four years while finishing her master’s degree.

“I got so much closer to God, and it just helped me so much,” said Caldera, who had separated from the father of her son, Tony, now 11.

Now the home’s director of adoptions and counseling, she said her experience helps her relate to single mothers.

“It’s easier for me to help them and encourage them to keep going,” Caldera said. “I tell them to keep trying and to keep their faith and go to church and do what they’re supposed to do, and things will get better.”

After earning a master’s degree in social work, she serves as a social worker for New Mexico Christian.

“I wish there were more ministries like this, because I think it brings the spiritual aspect to daily living,” Twofoot said. “It brings a community of people that will support you through it all.

“We have some mothers that are kind of getting the seed planted to give their life to Christ,” she added. “They’re not quite there yet. But at least it opens that door for them to explore Jesus and God and that way of life.”

As a result of her experience, Larez recently decided to be baptized.

“She’s been thinking about Jesus for a long time … but she felt like she needed to get her life together first before she came to Christ,” said Gary Cox, who lives with his wife, Diane, at Hope Haven and serves as the campus minister at the children’s home.

“Of course, we encouraged her the other way: ‘Come to Jesus, and he can help you get your life together,’” Cox added. “We love Biatriz and her family.”

Gary Cox, the home’s campus minister, speaks at a Sunday night gathering of the single mothers and their children. Photo by Resa Mann

Larez has taken full advantage of the program to improve her family’s life, Marshall said.

“I have just watched her blossom into a really fine lady,” he said. “And now she’s been baptized and is a part of God’s family. She’s just been a blessing. She’s a great example to others.”

For her part, Larez beams as she describes her children bolstering their Bible knowledge through Leadership Training for Christ and building Christian friendships at summer church camp.

Besides the spiritual aspect, the program has allowed her to save money and work on rebuilding her credit score.

“It’s just amazing, a once-in-a-lifetime opportunity,” she said. “It has helped me in all aspects of life.”