(RNS) — More than a third of young adults in the United States identify as non-religious. But many of them still want a wedding that is more personal or spiritual than a simple courthouse ceremony.

Chances are increasingly likely if you attend the wedding of a couple under 30 years old, their officiant won’t be a person of the cloth but someone who’s close to the couple.

In 2020, 1.2 million weddings took place in the United States, and adults under 30 accounted for more than 40% of them, according to the Wedding Report, a consumer industry data survey. Roughly a third of weddings were officiated by a friend or family member in 2017, according to The New York Times.

For some newbies, grabbing an internet ordination certificate and presiding over some nuptials is no big deal; for others, there’s more discernment involved. Here are five pieces of advice veteran wedding officiants suggest prospective ministers keep in mind as they prepare to help couples tie the knot.

Separation of church and state keeps a multi-religious society running smoothly but can cause some hiccups on a wedding day. Some states require a licensed or ordained minister to sign a wedding certificate, some don’t. If you’re not a pastor who has earned a seminary degree, officiants stress the importance of checking the local rules.

Wayne Delia got a certificate of ordination in the Universal Life Church, which is approved to officiate civil ceremonies in the state of New York. But he recommended calling the county clerk just in case.

“Even though I didn’t have to register with the county clerk, I called them up anyway and just said, ‘Here’s who I am, this is what I want to do, what do I need to do,’” said Delia on the phone with Religion News Service. He said the Cayuga county clerk appreciated the check in.

Open up your browser and type in “internet ordination” and chances are the first three results you will find are ads for the Universal Life Church. Universal Life Church was founded as a non-denominational religious organization in 1962 with the motto “Do that which is right.” Since then, the church has ordained about 23 million people. The church’s cheap ordination certificates became popular as a means of avoiding the draft during the Vietnam War.

More recently, in 2009, American Marriage Ministries founded an entirely online church to provide ordination to anyone who wants to officiate a wedding. The Church of the Flying Spaghetti Monster offers outlandish certificates on its sardonic website, bedecked with pirates and its titular noodle monster.

If their officiant is hesitant to sign on to internet ordination, some couples go to the courthouse before or after the wedding day for their legal marriage and wedding certificate. This alleviates pressure on the wedding officiant to dot legal i’s and cross paper trail t’s while also ushering the couple through the celebration of their marriage.

Another option is to become a notary public, which was the route Michael Stanley, a neurologist from Maine, wanted to take. His father was a notary public who would marry couples in a gazebo behind Stanley’s childhood home.

When Stanley was asked to officiate a friend’s wedding, he looked into taking the notary test to follow in his father’s footsteps.

“Any time you are acting in a position that is traditionally in the purview of clergy, I’m very sensitive to that,” said Stanley. He decided not to take the notary test and instead got ordained through Universal Life Monastery (an offshoot of Universal Life Church). “I would have preferred to have done notary public,” said Stanley.

“If I had taken my jaunt boat out to sea and married the couple as ship’s captain, I would have been on firmer ground morally,” he said with a laugh. “I don’t lose sleep over it, but I do get nervous about it.”

A wedding may seem straightforward, but even the simplest ceremony is a landmine of choices. Meghann Viens, a communications professional in Massachusetts, said it’s important to ask the couple how they want the details of the ceremony to go.

“Some want to say their vows loudly and repeat them after me, some want to recite them to each other more quietly,” said Viens.

Dusty Hoesly, a scholar of religion at UC Santa Barbara and an ordained minister in the Universal Life Church, emphasized that officiants should communicate with the couples extensively before the wedding about what language and symbolism they want in the ceremony. As an officiant, he shares multiple drafts of the vows and ceremony with the couple.

“That way, you make sure you don’t say anything that upsets the couple,” said Hoesly. “So many couples have told me they had clergy promise they wouldn’t say certain things and then go on and say those exact things.”

Michael Stanley models his ceremony on the Book of Common Prayer’s wedding rite and simply replaces “God” as it appears throughout the ritual with “love.” There are also an abundance of secular and religious online templates and scripts for officiants seeking guidance.

Stanley has gotten creative with symbolism. For one couple he substituted the Bible with a collection of Henry Wadsworth Longfellow poems. To the congregation, it just looked like an old, serious book, but it represented the New England coast where the couple had spent time building their relationship.

“I wouldn’t use just any old book, but rather something that represents something the couple wants to trust or put stock in,” said Stanley. “I wouldn’t use the Encyclopedia Brittanica, for example — unless they were crossword aficionados.”

Multiple officiants said the main pieces of choreography you’re responsible for are highly practical: If you tell the congregation to stand, also tell them to sit. And step out of the view of the camera after you utter the fateful words, “Now you may kiss the bride.”

RELATED: What ever happened to clergy performing weddings?

Be comfortable with public speaking

There aren’t a lot of qualifications to officiating the wedding of a loved one, but one is that you can’t be afflicted with stage fright. “You can’t crumble under public speaking pressure,” said Stanley.

Not every officiant has to be a natural orator, but officiants say you should be comfortable speaking in front of a crowd. (The average wedding size in 2020 was 107 people.)

A common wedding “sermon” is to share the story of how the couple came together, to let different sides of the family and friends get to know a little bit more about the other half. Dusty Hoesly asks the couple to share their love story with him, and he combines the narrative into a short homily. To Hoesly, sharing the story fosters a feeling of intimacy at the ceremony.

Michael Stanley keeps it short and sweet. He personalizes his weddings with a “sermon” in the form of a poem he has written for the couple.

‘Be prepared for big emotions’

From the bride and groom, from family members, or even from yourself.

Wayne Delia performed his godson’s 12-person wedding last summer in upstate New York. And he’s about to perform the wedding a second time for a crowd 10 times that size. He’s an atheist, but it was meaningful to him to wear the minister’s stole and say the words because it was meaningful for his godson.

Meghann Viens felt that officiating the wedding was just another way to be involved in the special day of two friends. She didn’t feel particularly large emotions. “It was nice to know I’ve made someone’s day special for them,” she said.

But, she said sometimes her presence helped buffer the couple from the emotions and expectations of the guests.

Viens said she was glad to shield the couple from negative feedback or disappointment on their wedding day. “I felt it was fine to complain to me that you don’t like that they’re doing this. But don’t go to them,” she said.

Stanley found the experience of officiating incredibly moving, what he called a sort of “sanctified third-wheeling.” While officiating a wedding, he found himself in awe of the power of simple words.

“It’s profound to realize it’s just a bit of paper, their love, and my hoodoo — some words — is all that says they’re different to each other than anybody else,” said Stanley.

RELATED: Fewer couples are marrying in churches. Does it matter?

Once Viens got her certificate from American Marriage Ministries, she said word got out that she could perform legal marriages.

“People started coming out of the woodwork who needed to get married,” Viens said with a chuckle.

Most of the five couples she has married were close friends or friends of friends who saw her officiate. Others are acquaintances who have found out she can perform a marriage quickly for legal or financial reasons. She enjoys being able to provide a service people need.

After his godson gets hitched (again), Wayne Delia is officiating the wedding for the child of a bridesmaid from his and his wife’s own wedding.

Michael Stanley has also been asked by his college roommate to officiate his wedding. Stanley says he finds officiating for friends fulfilling.

“I don’t take it lightly, the things that have been asked of me,” he said. “It’s an honor. If someone asks you to do it, you should.”

Editor’s note: This story has been updated to correct Michael Stanley’s state of residence. 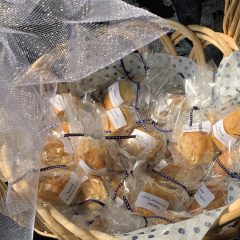 News
For immigrant families, a sweet wedding tradition preserves a taste of home 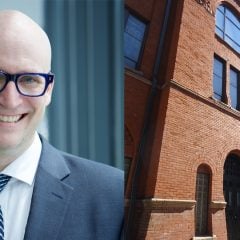