(RNS) — One night under a big tent at Billy Graham’s legendary 1949 Los Angeles crusade, his altar-call invitation was heard by ex-POW Louis Zamperini.

The rest — including the evangelist’s rise to fame and the former Olympian’s Christian conversion — is history. With the release Friday (Sept. 14) of “Unbroken: Path to Redemption,” history is repeating itself. Graham’s grandson, William Franklin Graham IV — known as Will — is featured as his grandfather in the climactic scenes with Zamperini in the “Canvas Cathedral.”

Will Graham, an ordained Southern Baptist minister, spoke to Religion News Service about his role in the sequel to the 2014 movie “Unbroken,” his memories of his grandfather and how their approaches to crusades differ.

What was it like to portray your late grandfather in the sequel to “Unbroken”? 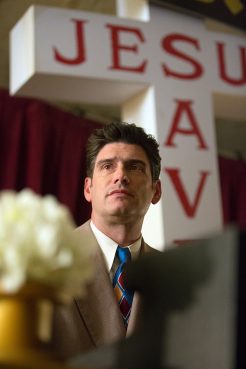 Billy Graham is played by his grandson, Will Graham, in “Unbroken: Path to Redemption.” Photo courtesy of WTA Group/Universal 1440 Entertainment

Playing my grandfather as Billy Graham in a movie — that was a little bit daunting. And it wasn’t because I was playing my grandfather. It was because I was doing it on a movie set. I’m a preacher. I’m his grandson. And so, in a sense, I carry on his legacy. I carry on what he’s taught me on an everyday basis. That doesn’t bother me. But trying to do it on a movie set is different. When I preach, there may be something I mispronounce or I slurred my words. But then on a movie set, the director says “Stop, Will. That was horrible. Do it again.” (Laughs) And so I had to get used to having a director being my boss from the pulpit. So, it was a great thing — one I’ll cherish, but it was a greater honor, not just to play my grandfather but to be in the bigger story of Louis Zamperini in the movie, “Unbroken: Path to Redemption.” I’m so grateful that I had a small part in talking about this great American hero.

No. I think people were disappointed that they couldn’t film the full, complete story. But the truth is, we have now two movies on Louis Zamperini and it still doesn’t tell the full story of his life. You need a miniseries to even come close. This is one of the most interesting men in human history, in American history for sure. What I’m so thankful for is that Angelina Jolie did such a good job on this movie, the first movie of “Unbroken.” It gave us the opportunity now to spend two hours on what we believe is the most important part of the whole story of him coming to Jesus Christ. Angelina’s success gave us the ability to spend two hours to talk about his conversion.

What did you know about Louis Zamperini before the first movie was out in 2014?

I didn’t know him personally. I knew of him from my grandfather, Cliff Barrows, George Beverly Shea — all my grandfather’s (ministry team). They all knew him. Also, I read Laura Hillenbrand’s book about Louis Zamperini. I got to know even more about him. So I was familiar with his story. 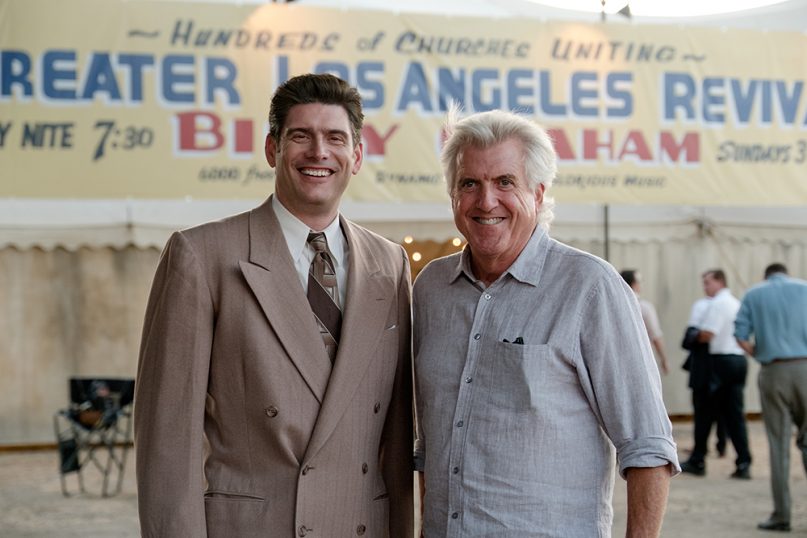 Will Graham, left, with Luke Zamperini, Louis Zamperini’s only son, on the set of “Unbroken: Path to Redemption.” Photo courtesy of WTA Group/Universal 1440 Entertainment

So you never met him?

No, I never met him, unfortunately. I’ll have to see him in heaven. He and my granddaddy are going to welcome me to heaven.

RELATED: Billy Graham, Louis Zamperini and the two nights in 1949 that changed their lives

With your grandfather’s death earlier this year — and my condolences — how do you intend to carry on his legacy?

I appreciate the condolences. We greatly appreciate that. There was a facet of my grandfather: He’s not been active for about 10 years. He’s done some things in those 10 years but for the most part, from a pulpit speaking standpoint, he’s been very quiet in those last 10 years of his life. And so we’ve already had to kind of pick up that. I have been an evangelist with the Billy Graham Evangelistic Association since 2006 and I’ve been working with them proclaiming the good news of Jesus Christ just like my granddaddy did in crusades all around the world. I continue to do that. I wrote my first book that comes out next month. It’s called “Redeemed: Devotions for the Longing Soul.” And this is another way that I can spread the good news of Jesus Christ, now, through book form. This movie helped me do it on the big screen. And so I’m trying to use all the things that my granddaddy did to proclaim the good news of Jesus Christ through all possible means, whether it’s in a book, whether it’s magazine articles, or TV or movies or radio.

During much of his ministry, Billy Graham called his evangelistic meetings “crusades,” but yours are called “celebrations.” How are they different from your grandfather’s?

They’re very, very similar in the sense that we have wonderful music. I’ll get up and I’ll preach from the Word of God just like my granddaddy did. Then, I’ll have an altar call, a time for people to make a decision. So the preparation at the event, the event itself and the follow-up is almost identical to my granddaddy’s. Now what has changed is that music style. My granddaddy had choirs and a lot more hymns, hymnal-type music, which I still love. But most people my age — I’m 43 years old — are more familiar with (contemporary Christian) band music. I do more of that in my events than the choirs. It just kind of depends on where I am. Overseas, there’s a lot more choir-type music but in the United States, there are more bands. Even my granddaddy changed a little bit as he got older. He didn’t have fewer choirs but he did have more bands included in his program. 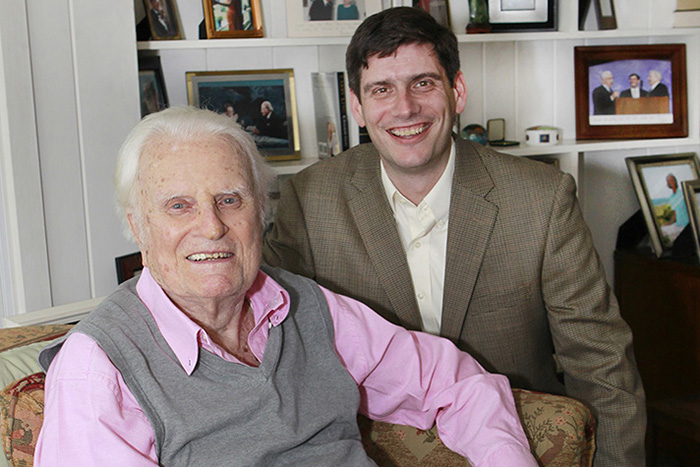 Your grandfather chose to step away from being publicly political and your father has been a vocal supporter of President Trump. Where do you stand?

My dad, my granddaddy and I, we believe in preaching the gospel of Jesus Christ. And my granddaddy knew that being a president of our country is probably the loneliest job there is. We always want to encourage our president, be a person that he can talk to — if God gives us a chance to talk to and speak truth into their life. So it doesn’t matter if it’s Republican or Democrat, we try to do that with all our presidents (but) it depends on each administration.

Have you ever met President Trump?

How do you recall your last conversation with your grandfather, or what were some words he imparted to you that are particularly meaningful to you?

The last time I saw my granddaddy, he wasn’t talking all that much. He would just nod and say “Praise the Lord” or something like that. It was a couple of weeks before he died I was with him. And my granddaddy was just weak. He’s 99. He’s just old. And I’m just sitting there talking with him, kind of an update on just some of the things I was doing. He knew about the movie I was working on. I was talking about (the celebrations)  I had just finished up. And he would just sit there and nod his head. And he kind of smiled. He loved to hear reports, just see how God’s still saving lives. Even to the day he died, he always loved that.