Ramadan Kareem, and welcome back to the Religious Freedom Recap, your monthly (now mandatory) vaccine against ignorance.

The U.S. remains buried under three feet of glitter following Friday’s Supreme Court ruling on gay marriage and a pride of Pride events across the country. While many Americans declared #LoveWins and tried to break the Internet with Facebook rainbows, others bit their tongues. The usual suspects were downright grumpy. Just look at those frown lines.

The big looming question this week is whether religious institutions and schools who choose to discriminate against gay married couples will lose their tax-exemptions.

Another loomer I wrote about is whether polygamy will be next in light of dissenting justices’ opinions on the subject.

In classic Texas style, state Attorney General Ken Paxton told county clerks to ignore SCOTUS and refuse to issue same-sex marriage licenses if they don’t wanna. Fewer than half of Texas counties are ready and/or willing to issue licenses.

In other gay news, a North Carolina teacher resigned after parents flipped out because he read their kids a book featuring gay characters. Outraged parents want the book banned or burned or a witch hunt or something.

A jury in New Jersey called BS/consumer fraud on a Jewish gay-to-straight conversion therapy organization because that stuff is as real as unicorns (sorry, unicorns).

In other SCOTUS news, Abercrombie & Fitch still exists and its “look policy” can’t discriminate against hijabis but presumably still dictates that all employees must have washboard abs.

The Supremes also ruled that “a tiny Arizona church that has no permanent home” can point its nomadic followers to flash worship sessions each Sunday using temporary signage.

Indiana’s controversial Religious Freedom Restoration Act went into effect Wednesday. The newly formed First Church of Cannabis planned to mark the occasion by getting stoned but backed down (for now) after police threats. Maybe they should have tried peyote.

California passed a law nixing religious and Jenny-McCarthy-said-so vaccine exemptions for schoolchildren. McCarthy’s ex Jim Carrey accused the CDC of being corrupt and called Gov. Jerry Brown a “corporate fascist” for “poisoning more children with mercury and aluminum,” in case you cared what the comedian thinks about vaccines.

Oklahoma thought it was a good idea to put a Ten Commandments monument on the Statehouse lawn three years ago despite church-state separation. The state Supreme Court decided otherwise, telling the government to get rid of it. Sad day for that creepy Satanic Temple monument that’s been in the works. 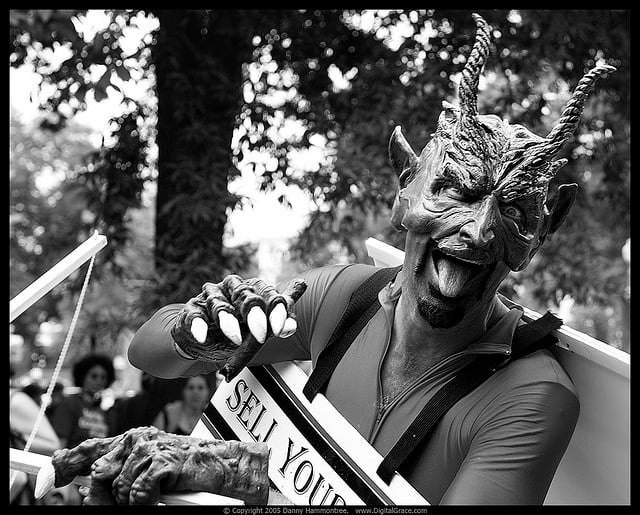 The Satanic Temple is presumably celebrating the Oklahoma decision while continuing its fight on other fronts, most notably in Missouri where it’s using the state’s RFRA to sue the state over a medically unnecessary 72-hour abortion waiting period.

A flight attendant who refused to serve a can of soda to a Muslim woman because she “might use it as a weapon” will no longer work on United flights. If she was so concerned that soda cans can be used as weapons why was she serving them to customers in the first place? #bigotlogic

South of the border, Mexico’s Supreme Court legalized gay marriage and a town elected a dead guy as mayor. He might prove more effective than some politicians. At least he’ll be less corrupt. 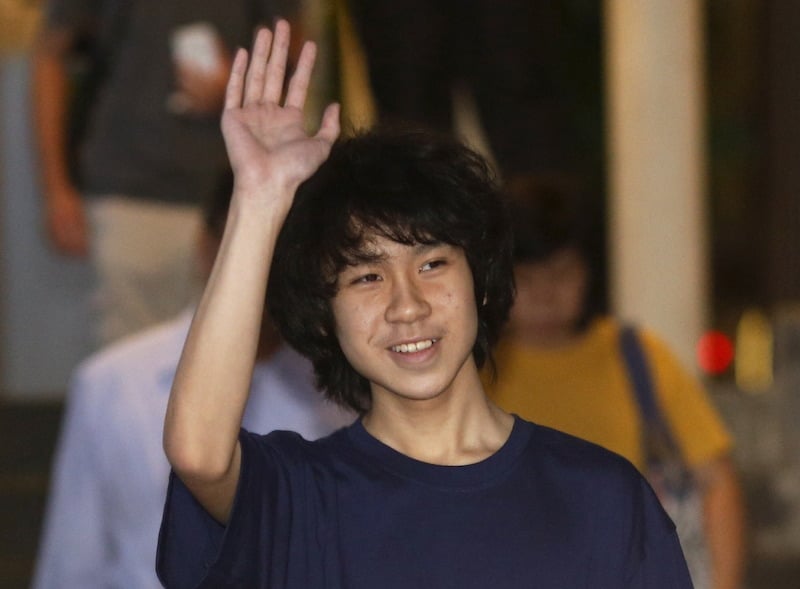 Amos Yee waves as he leaves the State Courts after his trial in Singapore May 12, 2015. A Singapore court on Tuesday found the teenager guilty of offending Christians and spreading obscene image in an online post that also carried comments celebrating the death of former prime minister Lee Kuan Yew. REUTERS/Edgar Su

Singaporean teen blogger Amos Yee, who I wrote about in May, was sent to some sort of rehab, not for boozing, but for continuing to upload content deemed offensive by thin-skinned Christians and Singaporeans. The 16-year-old sits in jail and now faces three years in prison.

Myanmar jailed a writer for two years for “insulting religion” during a speech he delivered last year. Buddhist monks in the country continue to insult their own religion by persecuting others. One group, the Association for the Protection of Race and Religion (seriously, that’s the group’s name), is trying to ban Muslim schoolgirls from wearing headscarves for no good reason. Some Thai monks want to help their bigoted Burmese brothers set up a radio station to more effectively spread hate, which we know went so well in Rwanda. Meanwhile the government continues to ignore the Rohingya issue. Part of me dies with each depressing headline because Myanmar is actually a fantastic country.

Pious fasting where I live in Cape Town would be comparatively easy. It’s the middle of winter here. The days are short.

Fasting is particularly hard in the predominantly Muslim region of Xinjiang, China, because the government banned it. Short of feeding tubes, its unclear how they plan to enforce a ban on the absence of an activity.

Adding insult to insult, an overwhelmingly Muslim part of Xinjiang hosted a beer festival targeting booze-consuming locals of which there are maybe three (or more, I’m not a demographer).

After Malaysia banned Christians from using the word “Allah” last year, the country’s High Court will decide whether the ban is constitutional.

The government finally dropped its fight against a bookstore manager it had hounded since 2012 for selling a “banned book” the government hadn’t yet bothered to banned.  But it convicted 9 women of “being transgender,” a ludicrous crime with unjust implications, and deported four tourists who streaked on a mountain, because nudity causes earthquakes in Malaysia, according to nonsense.

An extremist group in Bangladesh named bloggers and journalists in a death threat, which we’d better take seriously given the recent string of blogger murders in the country. At least one threatened writer, Taslima Nasrin, has escaped to the U.S.

Two men in Morocco were sentenced to four months in prison for performing an “obscene act” —— kissing —— in public. A gritty film about Moroccan sex workers was banned and its director charged with ‘pornography and debauchery’. Lighten up, Morocco.

Four Egyptian boys are out on bail but face charges of offending Islam for a film they made mocking ISIS.

The United Arab Emirates pretends to be tolerant. I’ve lived there, it’s not. Case in point, you can still be fined or jailed for eating or drinking in public during Ramadan.

A Zoroastrian group in Kurdistan is threatening to sue an Iraqi diaper company that bears the same name as Zoroastrian holy scriptures. Allegations of intent are swirling.

Ham is apparently a national security threat in Israel. One soldier found this out the hard way after being sentenced to 11 days in prison for bringing a non-kosher sandwich to base. The Israel Defense Forces have since dropped all disciplinary measures.

Oh Saudi. The Kingdom has already decapitated at least 100 people this year as heads continue to roll. Saudi’s High Court upheld a blasphemy sentence against blogger Raif Badawi the same week it played host to a human rights conference on religious freedom. Don’t worry, I flagged the glaring hypocrisy.

A Saudi TV star is taking on ISIS with satire and receiving death threats for it, as was expected. Writing the show must be easy given how ridiculously the group behaves, beheading women for ‘witchcraft’ and such. Half the time I think ISIS is satirizing itself. 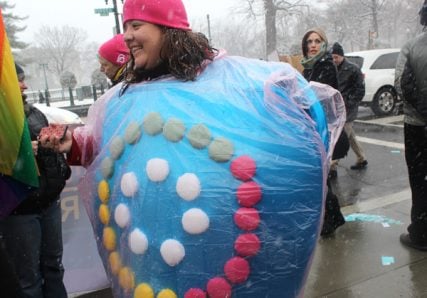 (RNS6-march25) Margot Riphagen of New Orleans, dressed as a pack of birth control pills, demonstrated outside the Supreme Court, which heard cases of two businesses challenging the contraception mandate of the Affordable Care Act on Tuesday (March 25). For use with RNS-SCOTUS-HOBBYLOBBY, transmitted on March 25, 2014, RNS photo by Adelle M. Banks

A Dutch women’s advocacy group used a drone to drop abortion pills over conservative Poland Hollywood has taken note. The Abortion Drone will battle The Gay Marriage Drone in an upcoming action/horror film aimed at conservative Christians (spoiler alert: the drones team up to defeat The Bible Drone, scattering free contraceptives and sex toys across the South).

Russia wants to crack down on foreign funding for religious minority organizations, which makes sense because it’s Russia.

Despite what you may have heard, Pope Francis is still Catholic. Liberal in relation to others in the Catholic hierarchy, sure, but that’s a pretty low bar. His new environmental encyclical seems to gloss over the fact that contraceptives are pretty effective at curtailing overpopulation, one of the most obvious contributors to environmental degradation. He’s also dead set on gender binaries and stressed the need for children to have two heterosexual parents in a speech he delivered just one day after a Pride march in Rome, in case anyone was persuaded by all those rainbow flags.

The Pope is presumably miffed about Ireland. After securing gay marriage rights in May’s blowout referendum, liberals are trying to ease the country’s strict abortion laws.

In London, a Hasidic Jewish sect planned to ban women from driving their children to school. Upon learning that the U.K. is not in fact Saudi, the group backed down.

Episcopal cardinals and bishops from across Africa met in Ghana to discuss and unanimously oppose the “the enemy of the human race,” AKA people who support divorce rights and gay marriage. 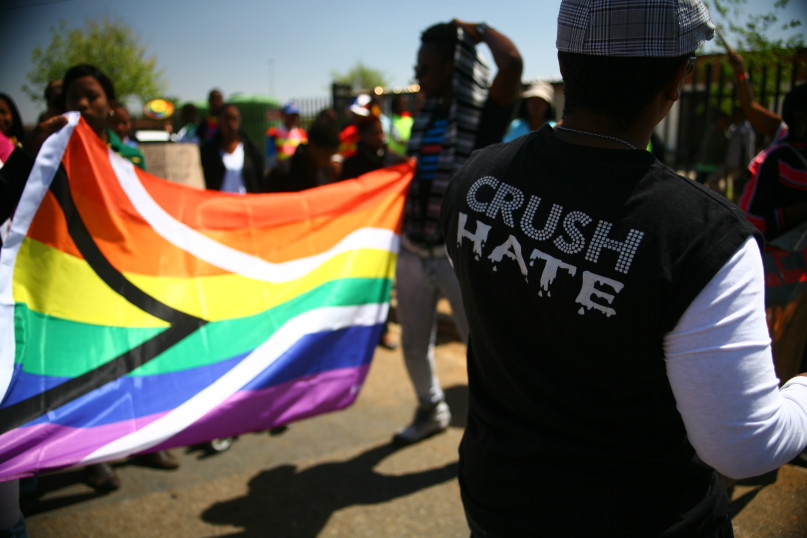 A march in KwaThema township east of Johannesburg on September 17, 2011. Photo by Melanie Hamman Doucakis courtesy of Laura Fletcher.

I’d argue that a more dangerous “enemy of the human race” might be people who murder other members of the human race because of their sexual orientation, a real threat facing black lesbians in South Africa’s townships and far beyond.

LGBT people continue to flee Uganda for Kenya to avoid discrimination and murder. This worldwide “enemy of the human race” shows no sign of stopping.

A court in Nigeria sentenced nine Muslims to death on charges of blasphemy for insulting the Prophet Muhammad by saying that a local sheikh was “bigger than” the prophet, which I thought was a flippant phrase to emphasize popularity (Taylor Swift is bigger than God) but is apparently a death-worthy crime in the eyes of zealots.

Zim and Zam need a serious reality check. Zambia just recorded its first albino killing, a serious problem in neighboring Tanzania where witchdoctors sell their ‘magical’ body parts. Parents in Zimbabwe are freaking out about Satanism and witchcraft. Schools are closing as a result, disrupting children’s education and preventing them from learning that magic isn’t real.

Happy 4th! If you want to receive next months’ recap straight to your inbox, go ahead and sign up below.