(RNS) — It’s no news that 2020 will go down as one of the worst years in recent memory. But the triple-whammy of pandemic, economic crisis and demonstrations for racial justice that left many Americans beleaguered and angry also yielded some inspiring and profound stories of faith and spiritual connection. Here are 11 stories by our staff and frequent contributors that captured moments of resilience and perseverance, and even a few moments of celebration.

Multiracial churches growing, but challenging for clergy of color
By Adelle Banks

In 1998, 6% of congregations of all faiths in the U.S. could be described as multiracial; in 2019, according to preliminary findings, 16% met that definition. As multiracial and multiethnic congregations continue to sprout up at an impressive rate, the rapid growth can sometimes obscure the fact that life in a multiracial church isn’t always easy.

Conceived months before race became one of the biggest issues of the year, Adelle M. Banks’ January story was one of a five-part series, “Beyond the Most Segregated Hour,” assessing how attitudes about integrating American Christianity have progressed since Martin Luther King Jr.’s 1963 comment, “It is appalling that the most segregated hour of Christian America is 11 o’clock on Sunday.”

In Minneapolis, faith groups rush to aid demonstrators as they decry racism
By Jack Jenkins

In late May, massive racial justice protests broke out across the country in the wake of several Black deaths at the hands of police. The protests often had clergy present, and many were organized by faith groups, including in New York, Chicago and Los Angeles. In D.C., police used tear gas to expel clergy and protesters from in front of a church so President Trump could take a photo there. In Louisville and Pasadena, churches offered protesters sanctuary from police.

The protests started in earnest in Minneapolis following the death of George Floyd in May. His final moments were recorded in a widely shared video: Floyd, a Black man, is seen writhing under the knee of Derek Chauvin, a white police officer, begging the official to let him go while gasping, “I can’t breathe.” 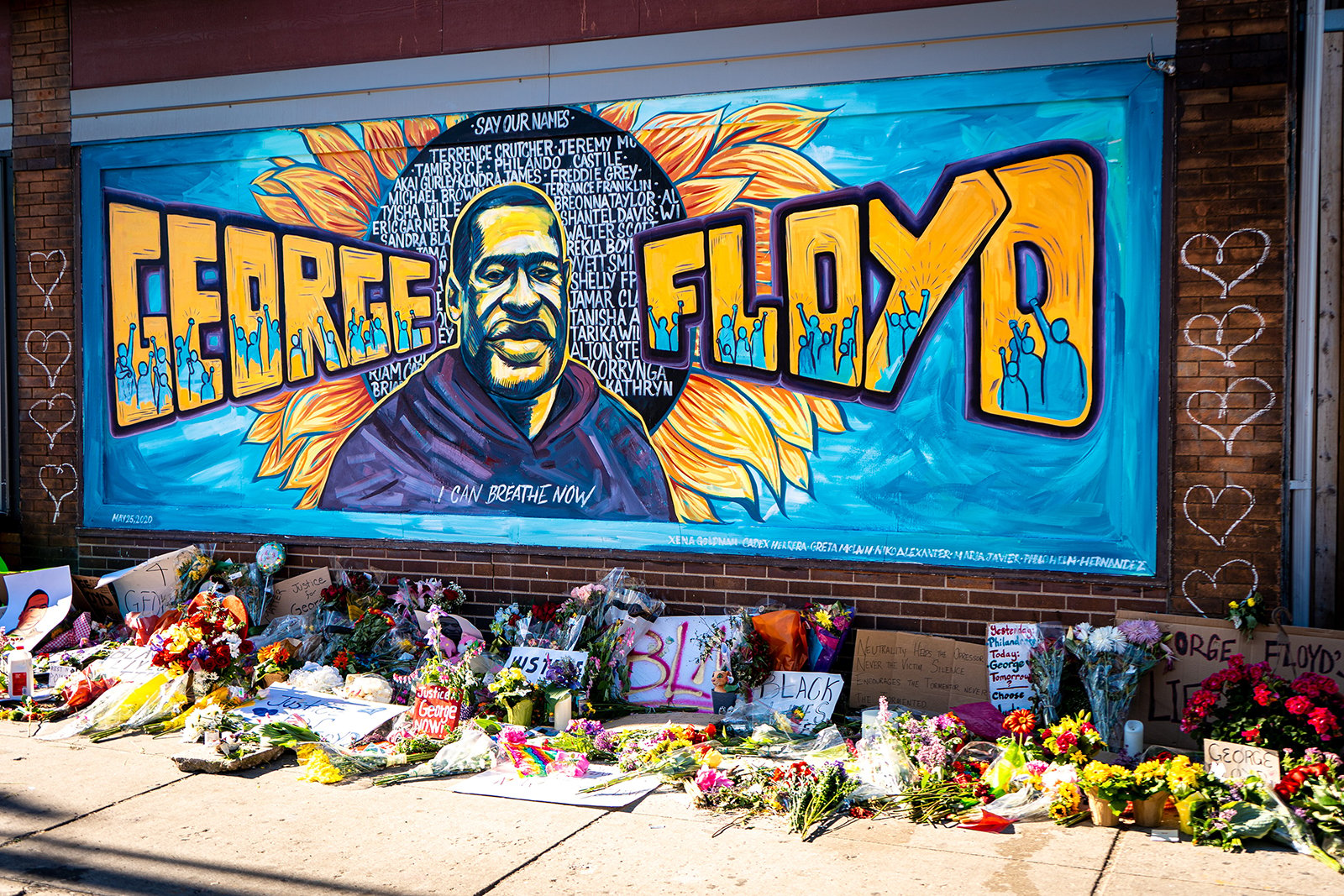 A mural and memorial honoring George Floyd and other black victims in Minneapolis, Minnesota. Photo by Munshots/Unsplash/Creative Commons

A dance circle blocking an intersection in Pasadena, California, during this summer’s George Floyd-inspired demonstrations becomes a model for ending racial violence: a place where non-Black people stand around the perimeter of the dancing crowd, disrupting the flow of traffic and acting as a barrier to police violence so the Black people in the center can experience, even briefly, joy.

This story, written by RNS columnist Andre Henry in June, captured young activist Christians’ sense that the evangelical church had failed to answer the moment when much of the country erupted in protest over racial injustice.

Henry’s story was just one of the surprising, inspiring ways people of faith responded to 2020’s reckoning with race, from Jewish, Muslim, Christian and Wiccans joining hands in Oregon to support protesters, to one North Carolina pastor’s determination to march against racialized policing. Read all our coverage here.

In emerging role, chaplains are providing spiritual care for activists in movements across the nation
By Alejandra Molina

“Where do I find hope?” or “Why isn’t God doing something here?”

The moral certainty of many activists sometimes belies their despair when a man is executed despite their efforts or when police, instead of listening, defend against their pleas to spare Black lives. Movement chaplains provide spiritual and emotional care before, during and after a protest or demonstration, using sacred texts and physical consolation to create healing in tough and often disappointing fights.

This July story was one of several we ran tracking the particular strains that 2020’s crises put on chaplains, from the Buddhist hospital chaplains who found themselves suddenly in greater demand, to those chaplains of every faith who counseled COVID-19 patients through existential crises as much as spiritual or medical ones, and most recently to those who were ambivalent about being among the first to receive a vaccine. In this June 27, 2019, file photo, then-Democratic presidential candidate Sen. Kamala Harris of California listens to questions after the Democratic primary debate hosted by NBC News at the Adrienne Arsht Center for the Performing Arts in Miami. (AP Photo/Brynn Anderson, File)

Few, if any, vice presidents have had as much exposure to the world’s religions as Kamala Harris, the 55-year-old senator from California who became the first vice-presidential nominee of a major party in August. Townsend Gilkes, a professor at Colby College, wrote then that Harris’ ethnic, racial and cultural biography represents a slice of the U.S. population that is becoming ascendant but has never been represented in the nation’s second-highest office.

Frequent RNS contributor, Cheryl Tonwend Gilkes, argues that, like the biblical Queen Esther, Harris seems to be specially shaped for “such a time as this”: during a reanimation of the Black Lives Matter movement and just as the deaths of two civil rights icons, Congressman John Lewis and the Rev. C.T. Vivian, reminded us voting rights are still a crucial issue.

Harris belongs to a long lineage of Black women who have been loyal to the politics of liberation, participation, emancipation and uplift, knowing that raising themselves up would benefit entire communities and the country as a whole.

QAnon: The alternative religion that’s coming to your church
By Katelyn Beaty

In the fraught political atmosphere of 2020, Katelyn Beaty wrote in August, evangelical Christian pastors are worried their congregations are falling prey to QAnon, an internet phenomenon that promotes a tangle of conspiracy theories. With its dehumanizing language that equates certain people with evil, QAnon is exhibiting a power to divide people and spread hate. It’s also hurting Christian witness by challenging confidence in our institutions and even in the authority of the Bible.

Beaty’s essay was one of several warnings about QAnon that appeared in our opinion pages this year. “Religion Remixed” columnist Tara Isabella Burton’s inquiry into why QAnon has taken hold in our secularizing age concluded that often white supremacist followers “yearn for a world in which everything makes sense and where they at last have a role to play.” Necessity, they say, is the mother of invention, and the pandemic necessitated a lot of innovation in houses of worship this year. From Zoom Christmas pageants and Eid Bazaars, to shofar pop-ups, to a Muslim virtual “matchmaking” project, religious groups and leaders scrambled to adapt for coronavirus restrictions. There were bloopers, of course (who can forgot the priest with the googly eyes), and church software companies had to field an “unending stream” of questions from tech-challenged clergy.

But, as the pandemic wore on and the weather warmed up, some religious groups pivoted from technology and headed outside to worship, like Faith United Church of Christ in Pennsylvania, where more than two dozen people joined a brightly colored flotilla of kayaks one Sunday in August.

In a year of global pandemic, social unrest and widespread armed conflict, Pope Francis released his third encyclical in October, mapping out the moral guidelines for “an open world” that places human dignity at the forefront, ahead of national borders, private property and racism.

The encyclical, titled Fratelli Tutti, tackles the challenges faced by today’s globalized society, from racism to immigration to inter-religious dialogue. 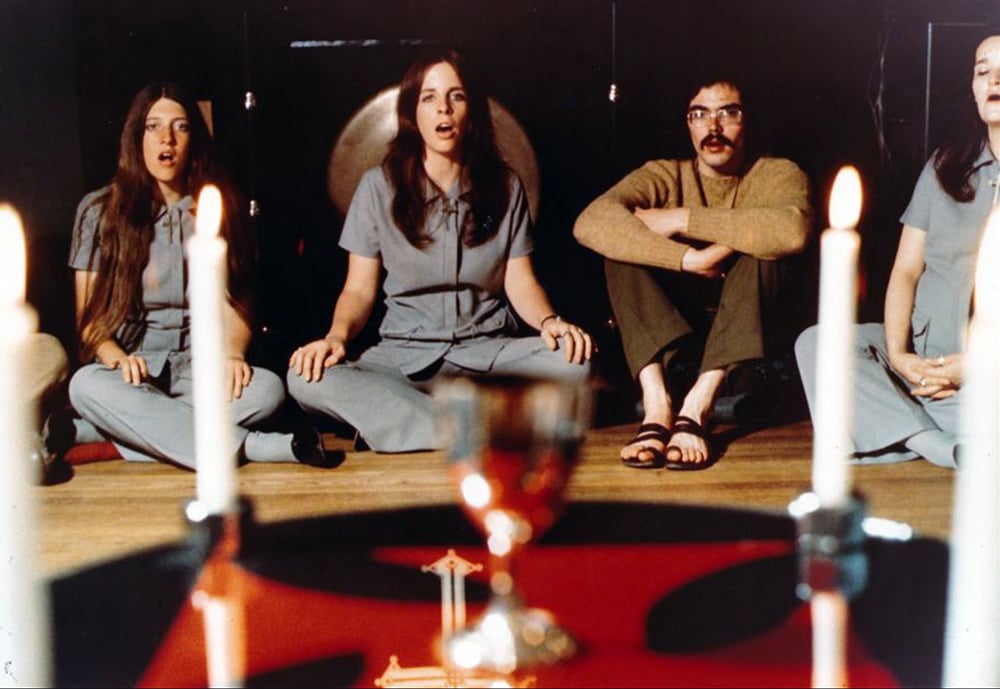 A ritual scene from “Sympathy for the Devil: The Story of the Process Church of the Final Judgment’’ depicts the cult group’s Boston chapter. Courtesy image

Even in a year dubbed by many as “unprecedented,” there were some religion stories that stood out — like that of Jared Garrett, a father of seven and volunteer pastor, or bishop, of a local congregation of the Church of Jesus Christ of Latter-day Saints.

But Garrett didn’t grow up in the LDS church. He was raised in a small nomadic apocalyptic sect founded by ex-Scientologists turned Satanists turned animal rescuers. Garrett recounts his childhood inside the cult, where kids were separated from their parents and the nuclear family was deemed obsolete, and his journey to a very different kind of faith.

Across America, Muslims are becoming a fixture on the disaster relief landscape
By Aysha Khan

This November story caught up with Muslim volunteers helping to clean up and restore communities recovering from natural disasters. Over the past 15 years, as white Christian aid groups have seen a decline in participation and donations, Muslim philanthropies have provided needed cash and muscle to fill the gap. Muslim aid workers’ relative youth — and their faith’s mandate to help — has made them a growing force in disaster and emergency relief projects in the U.S., from hurricane cleanup to helping out after the West Coast wildfires.

Khan’s story was part of a series on the changing field of faith-based aid and development organizations, produced in partnership with the Pulitzer Center. Other stories in the series covered the aging but faithful workers of the Southern Baptist Convention’s national relief network; a mobile clinic in East Tennessee run by Catholic nuns; and one international aid NGO’s efforts to rally Millennials to support its future. 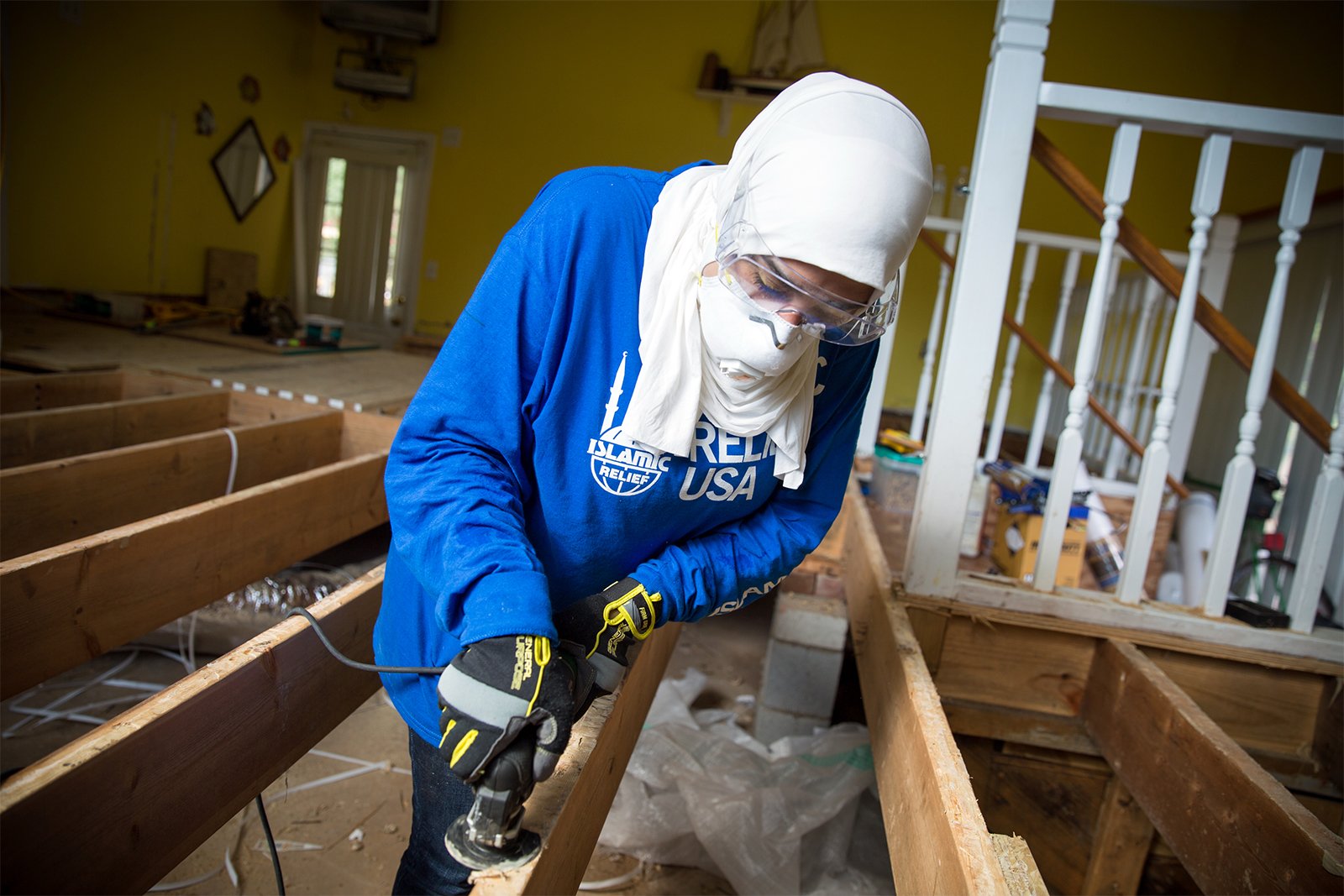 In a quietly absorbing story, RNS veteran reporter Shimron took a look at how race and faith operate apart from the upheaval of demonstrations and mutual recrimination. For years, even as racial justice and reparations for slavery have occupied U.S. Christian denominations, a Black United Methodist pastor in one of the most conservative cities in North Carolina has gingerly approached racial issues without alienating his flock. 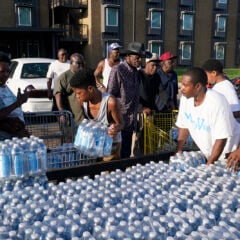